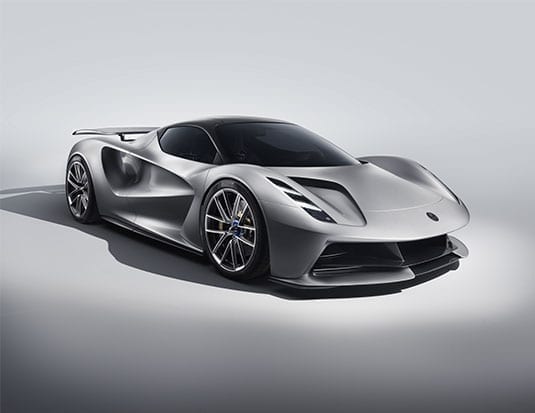 The Evija was designed with ultra-weight carbon fibre monocoque, making it the world’s lightest production EV hypercar at just 3,703 lbs. With a target output of 1,470 kW (1,972 bhp), 0-100 km/h in under three seconds with a top speed of 320 km/h, and a pure electric driving range of 400 km, the Evija is the world’s most powerful series-production road car. The vehicle was engineered and designed in the U.K., with a planned production of only 130 vehicles at Hethel, the home of Lotus since 1966.

It was recently unveiled at the Royal Horticultural Halls, London, where more than 350 VIP guests were in attendance. The guests consisted of automotive, business, technology and design media alongside U.K. business leaders, corporate and commercial partners government officials, Lotus employees, racing drivers, and other distinguished friends of the brand.

“Our auto industry has long been a source of national pride.  The launch of the U.K.’s first all-electric hypercar–designed, engineered and built here in the U.K.–is a testament to the skills and expertise of the workforce at Lotus,” said the Rt Hon Greg Clark, Secretary of State for Business.

Senior figures from Geely Auto, a growing automotive group and a majority shareholder of Group Lotus, also attended the unveiling. The Evija is the first new model since Geely took control in 2017.

Phil Popham, Lotus Cars CEO described the vehicle as a bold statement of intent, stating, “Evija will re-establish Lotus as a leader in terms of engineering and design. It is a hypercar that is built ‘For The Drivers’.”