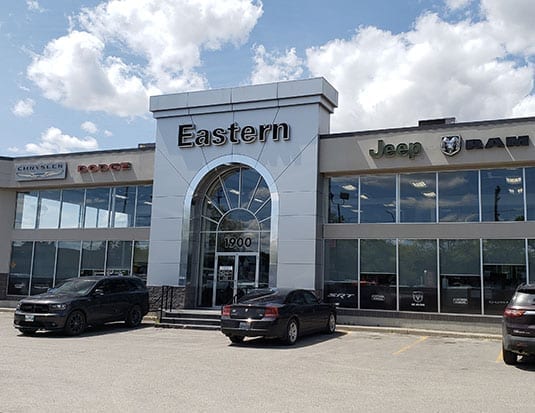 This Winnipeg dealership wants to talk to you… in any language you like.

Good communication with your customers is essential to your business, but what if there’s a language barrier? Eastern Chrysler in Winnipeg is meeting that challenge head-on. In addition to having multilingual employees, it uses a program that can translate its consumer website into more than 200 languages.

“We spent a fair bit of time reviewing our online presence and our web outlook,” said General Manager Frank Veert. “Whether it’s in the building or online, we want to give our customers the best experience. Our biggest lead source is through online, so we want to cater to that audience.

“The car business is in how much you’re generating, and what you’re closing. If you give someone a good experience and give them information you’ll get more leads, and that’s why we make this a priority.”

Eastern Chrysler has been in business for more than 70 years, and in 2013, it became part of Auto Canada. Veert joined in October of 2018. He’s only 25, and while he said he has learned a lot from older management, he brings in a new perspective. “It’s outside-the-box thinking,” he said. “I’d previously worked as the general manager at a Jaguar Land Rover Volvo store. The Chinese community was a big portion of our business at that dealership, and so we did advertising and promotions to them. In Winnipeg, we’re surrounded by 80,000 people in the Filipino community, so we made a strategic plan, and that’s where it came from. The management team came up with the programs here.”

In addition to the translation feature on the website, Eastern Chrysler has employees who speak Filipino, Ukrainian, Italian, Portuguese, Spanish, French, Russian, and Hindi. “We’ve been doing the website translation for six months or so, and a lot of our staff who speak different languages were hired within the last six months. Winnipeg’s a very multicultural city. Our hires are on the premise of their talent and history in the business, but it’s a bonus when they can speak another language and have a connection to different demographics of our city. We have people who will drive 45 minutes to our store, because we have a salesperson in that language, and we’re deeply involved in that community.”

Catering to the community

The dealership did a campaign in Mandarin for Chinese New Year; Veert said there are a lot of younger Chinese in Winnipeg attending university, “and they buy a lot of cars.” There have also been Punjabi promotional ads. But with such a large Filipino community nearby, Eastern Chrysler sponsors a basketball team, is a sponsor in the local Filipino festival, and recently was the venue for a fashion and talent show, organized by a third party, that brought over 300 people to the location.

“It was on Sunday, when we’re normally closed, so we were the facility for the event,” Veert said. “We had all of our Filipino salespeople and staff there, just tapping into different parts of the community, and going the extra mile that maybe some don’t. Our business is a game of inches, and you have to think how you can be one inch ahead of your competitor.”

The dealership has 12 salespeople, a 17-bay service department, and a full body shop. “Our new car sales are up 30% year-to-date, and we have some really good momentum around the dealership,”

Veert said. “We’re not quite first place in Winnipeg, but we’re close, and that’s what we’re going for.”

Even with that momentum, car sales have slumped across the country, and Veert has found a big opportunity in used cars. “We’ve put a focus on that side of our business. We’re wholesaling fewer used cars, and keeping a range of vehicles. Used also helps the service and parts, and the body shop. If you can run a good used car department, it helps the whole dealership, and that’s where we’ve been able to find opportunity. We’re a team that’s market-driven. If new cars are down, then we’re down, so we looked to see where we could find other areas of opportunity and growth.”

The need to communicate

The application on the dealership’s website simply translates whatever’s there, so it only has to be updated in English. Anything that’s on the site shows up in the language selected, so customers can make service appointments through it as well, and in most cases, someone at the store can speak with them.

They had an exception when a Chinese shopper came in recently. “He couldn’t speak any English, so he and I and the salesperson communicated through Google Translate on our phones. He’d type in his message, we’d type ours, and we negotiated a deal, and he bought a 2019 Ram. How do you work with someone who’s deaf, or who can’t communicate? You type it.

“We have our mission statement, and we know the importance of social media. People want more information online before they come into the store. We’ve found that by sending customers videos, pictures, even a selfie introducing yourself as a salesperson, it goes to that next step. We need to stand out and give value to customers in a different way.”