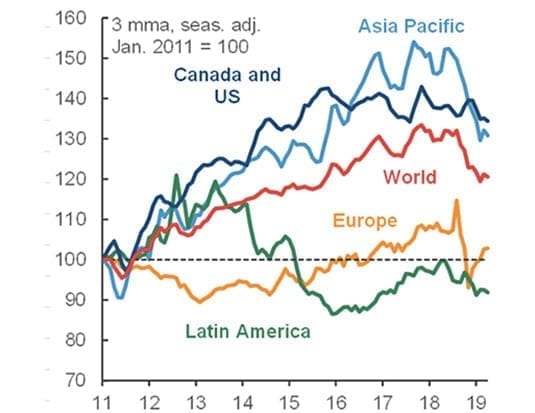 Sales continue to slump at home and abroad.

April gave us little reprieve from the global auto sales slowdown, with new vehicle sales dropping 7.9% year-over-year during the month. That marks the eighth consecutive month of y/y declines worldwide, with only a few bright spots among them.

The pace of the global slowdown was amplified by quirks in emerging markets. China led the decline with a 17.7% y/y drop in April, suggesting that the previous month’s rebound was only temporary. The slowdown in most advanced economies, including the U.S. and Canada, is proceeding largely in line with the moderating growth outlook, while the European Union is similarly returning to fundamentals after it saw a rebound from the regulatory shock last fall.

April’s sales in Canada dropped by 3.5% y/y, continuing a 14-month decline from the peak of 2017. Auto sales for April gave us a total estimated 1.93 million units on a seasonally adjusted annualized rate (SAAR) basis, representing a 2.2% drop. We anticipate that year-on-year declines will continue through the next quarter but will pick up later in 2019 thanks to a modest rebound in GDP growth, as well as a lower base effect from the slowdown late in 2018. Our forecast is a total of 1.93 million sales for 2019, down from 1.98 million in 2018, and from 2.04 million in 2017.

Fleet sales continued to partially offset the fall of retail sales, and they were up 3.2% YTD at the end of March. There was particularly pronounced growth for cars, up by almost 16% y/y. This coincides with the introduction of the federal accelerated depreciation tax measure, and we expect this trend to continue with the introduction of similar provincial incentives in Ontario and Quebec.

Light trucks also continued to climb in April, with a third consecutive month of growth at 1.2% y/y. This segment now represents almost three-quarters of the Canadian auto market.

Canada continues to show variability and month-to-month volatility across its provinces. Central Canada is trending around the national average on a year-to-date basis, with a drop of 4% y/y in April’s sales: Ontario was slightly stronger, while Quebec fell harder. An unusually cold April likely dampened sales and both provinces should firm up slightly towards the end of the year, but they’ll still be below their strong performances of 2018.

Western Canada continues to underperform against the national trend, dropping 5.7% y/y in April. We expect British Columbia’s sales to pick up and finish the year on the positive side, but Alberta should see a continued drag through year-end.

Atlantic Canada had two months of relatively strong growth in February and March (albeit against a weak base in 2018), but reversed the trend in April, with all four provinces hovering around a 10% y/y decline. We expect a continued downward trend for the remainder of the year, and while Newfoundland and Labrador may see a small boost in fleet sales related to major project activity, it will only marginally offset retail sales declines.

The United States continued its steady decline, in line with moderating growth. Its April sales fell by 1.7% y/y, which marked a very modest improvement over the prior two months but was still a continued year-over-year decline for the fourth consecutive month. Despite significant changes to personal income taxes under the Tax Cuts and Jobs Act (TCJA), refunds were down by a modest 2% from last year given offsetting lower withholding taxes.

A temporary boost to March’s sales of 17.5 million SAAR units was largely erased by April’s performance at 16.4 million. This brings the year-to-date average to 16.8 million SAAR, and that’s where we forecast 2019’s overall sales to land. That is a drop from the 17.2 million sales in 2018, which benefited from strong growth and accommodative policies, including corporate tax incentives and accelerated depreciation allowances under the TCJA.

Mexico saw a sharp drop of 10.2% y/y in April, ending a three-month positive streak of month-on-month sales. That earlier strength resulted from minimum wage increases, but heightened domestic and trade policy uncertainty weighed heavily on April’s performance. We expect the ongoing trade conflict to weigh on the sales outlook, along with high interest rates and a slowing economy.

China’s April decline followed a temporary rise that was likely related to the Lunar New Year, and is in line with the decline the country saw in the six months through February. New vehicle emissions standards in some provinces affected April sales, although it did boost alternative-energy vehicles by 18% in April, and these vehicles now represent about 5% of new sales. Easing trade tensions and government support should ease China’s decline later in the year.

We saw bright spots in the European Union, with sales continuing a solid recovery with six consecutive months of growth, while Brazil’s YTD growth stands at 8.8%. We expect Brazil to offset declines in Argentina, Peru, and Chile, but falling sales worldwide, including a sharp plunge in India, are expected to continue.