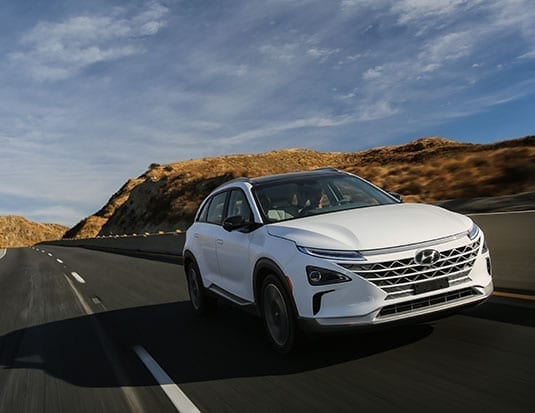 The Hyundai NEXO is joining the sustainable mobility market. Currently the only hydrogen fuel cell powered crossover SUV, it emits clean water vapour as it is driven. By replacing the Hyundai Tuscan FCEV in North American markets, the NEXO will become the flagship for Hyundai’s future eco cars.

Unlike the Tuscan—which started with a gas-powered platform and was modified with fuel cell technology—the NEXO is built as a fuel cell vehicle from the ground up. “It’s always going to be the Santa Fe with the fuel cell in it, or the Tuscan with the fuel cell system in it. We’ve made [the NEXO] specifically for fuel cell technology so that it was built around the technology—the technology wasn’t adapted to an existing car. So, it’s just a completely different vehicle that rivals probably the most luxurious, technologically advanced vehicle in the market today,” says Don Romano, President & CEO of Hyundai Canada.

The NEXO boasts lighter construction, 160 horsepower and 291 lb ft of torque. Additionally, a five-minute refill delivers up to 570 km of range and continues to provide great range even in cold climates, like Canadian winters.

While the NEXO represents a significant step towards a hydrogen future and is available to Canadian consumers for $73,000, the supporting infrastructure is not yet in place. Consumers still have the option to reserve the vehicle for a chance to test drive it at dealerships, but only a few markets have hydrogen fuelling stations available.

“Right now, we’re just trying to build awareness so that the government, which we have been very successful with, recognizes that it’s an electric vehicle, and puts incentives in place when we talk about infrastructure. As you spread that awareness, more and more people [will] drive it and realize the advantages of hydrogen over standard plug-in electric. We’re not doing it for volume, we’re not doing it for market share, we’re not doing it to grow the business; we’re just trying to get this technology understood by consumers, so they know that it’s an option out there,” explains Romano.

To improve the situation, Hyundai Canada is partnering with Shell, 7-Eleven, Hydrogenics, Ballard Power Systems, and Quebec’s and British Columbia’s governments to invest in future hydrogen pumps in different provinces.

Like Toyota and Honda, Hyundai Canada is investing in hydrogen technologies, but not necessarily on the same projects. “The idea that a manufacturer can build the cars and the infrastructure is ridiculous. So, we’re just helping to get it started,” says Romano.

The company is also collaborating with Modo, a Vancouver based car-sharing service, to bring NEXO to a wider audience than ever before. Modo will soon make two NEXO vehicles available for consumer use through its services, promoting Canadian awareness and their experience with this technology.

“We are excited to be the first car share to offer consumers the opportunity to experience a hydrogen fuel cell vehicle for themselves,” says Patrick Nangle, CEO of Modo. “Supporting a cleaner B.C. aligns with Modo’s social and environmental purpose as a member-owned cooperative.”

Romano adds, “We’re working with Modo to get as many people as possible to get behind the wheel, and we’re the only company doing that. Anybody in Vancouver can sign up—and they don’t have to buy it, they don’t have to spend $73,000—and take it out for the weekend and just drive around and experience it. I believe it’s a marathon, not a sprint.”

A long way to the finish line

Hyundai Canada is looking forward to the day when we’ll see hydrogen fuelling stations across Ontario, especially since it is one of the three largest markets in Canada. However, there are no plans to pursue this goal just yet as Ontario’s existing government does not consider it a priority.

“Montreal is on board. Vancouver is on board. Now we just have to get Toronto on board. Those three cities are the biggest users for gasoline-powered vehicles; therefore, the biggest opportunity to convert to this new technology,” states Romano.

He further explains that Hyundai is hoping to help build a supporting infrastructure in Vancouver first, and is currently investing in a second fuel pump within the city. Romano says that without the infrastructure in place, consumers will not be able to enjoy all that the NEXO has to offer.

Montreal will be the next stop. Hyundai Canada will search for local ride-sharing companies to partner with to begin spreading awareness of the NEXO in the city. Romano predicts that fuel cell vehicles will be the most popular electric vehicles, simply because of their convenience, once the infrastructure is in place.

“California is rocking forward with all of their fuel cell systems. We need to catch up,” says Romano. “Most of the companies that are involved in building their technology are based in Canada, not in the U.S. We have some of the brightest, most extensive technological background of any country in the world when it comes to hydrogen. We should be leading, not following.”