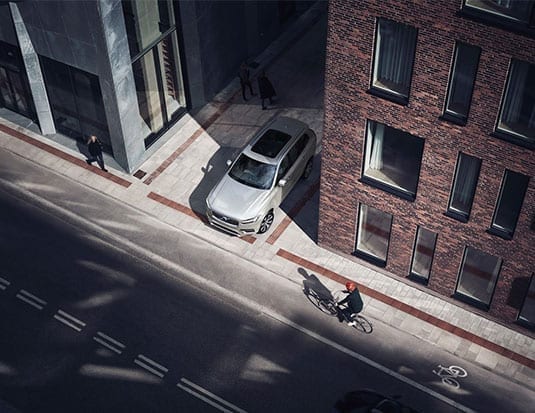 By combining Volvo Cars’ automatic emergency braking and pedestrian detection system, cyclist detection with full auto brakes uses the car’s cameras and radars to detect cyclists, warn the driver of an imminent collision, and apply the brakes if further action is required.

Now, Volvo Cars, a leader in automotive safety developments, is collaborating with the Swedish sports and safety brand POC for a series of world-first crash tests of bike helmets against cars as part of a new research project to protect cyclists on the road.

This Volvo-POC research project consists of specially designed crash tests at the Volvo Cars safety research facilities in Gothenburg, Sweden. These tests are part of a wider research project that aims to understand the types of long-term injuries sustained by cyclists after accidents. Alongside POC and Volvo Cars, this larger project also includes KTH Royal Institute of Technology, and MIPS and Autoliv, and is financed by Vinnova.

Current bike helmet testing procedures are fairly simple and do not take vehicle-to-bike accidents into account. So, based on existing regulatory test procedures for pedestrian head protection, these new tests include simulations of real-life possibilities; POC bike helmets are worn by crash dummy heads and mounted on a testing rig, from where they are launched towards different areas of the hood of a static Volvo car, at different speeds and angles from various measurements. These tests also allow for a direct comparison between wearing and not wearing a helmet and help POC develop safer and more protective helmets in the long run.

“This project with POC is a good example of our pioneering spirit in safety,” said Malin Ekholm, Head of the Volvo Cars Safety Centre and one of the company’s leading safety engineers. “We often develop new testing methods for challenging traffic scenarios. Our aim is not only to meet legal requirements or pass rating tests. Instead, we go beyond ratings, using real traffic situations to develop technology that further improves safety.”

“Much like Volvo Cars, safety is at the very centre of our mission and drives all our ideas and innovations,” says Oscar Huss, Head of Product Development at POC. “By working closely with scientific leaders in the POC Lab, we strive to lead the way in introducing new safety ideas. Certification standards are essential, but they should never limit our willingness to look beyond their parameters to find better and more innovative ways to reduce the consequences of accidents.”

In an earlier collaboration, Volvo Cars and POC worked on a pilot to connect bike helmets with cars to avoid accidents. With the relatively recent release of the pedestrian detection and cyclist detection with full auto brake systems, Volvo Cars demonstrates how it has expanded its definition of safety to include people outside its cars.