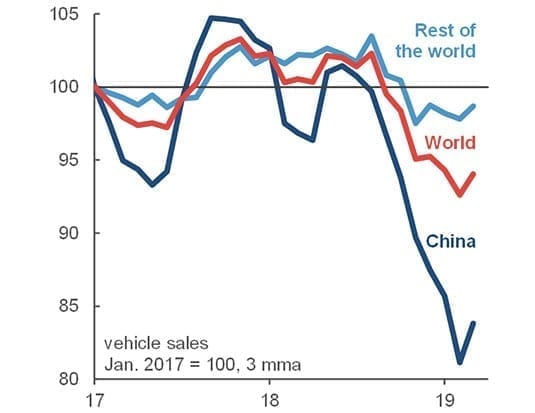 Despite the slump, we see some bright points, including signs of life in China’s market.

Global auto sales are still weak, including here in Canada, where we saw our thirteenth consecutive year-on-year decline in March. But there are some positive points as well, including some welcome signs of life in China’s market.

Global sales fell by 4.7% y/y in March, marking the seventh consecutive month of y/y declines. However, we saw the strongest month-to-month global expansion since early 2012, thanks to a surge in purchases in China following a lag around the Lunar New Year.

In Canada, sales fell in March by 2.5%, their thirteenth consecutive y/y decline. However, when comparing month to month against the weak final months we saw in 2018, there’s a continuous improvement, with a rise of 0.9% m/m to 1.97 million units purchased in SAAR (seasonally-adjusted annualized rate) terms. However, despite a rise in the first quarter of 2019 when compared to the last quarter of 2018, we forecast that Canadian sales will slowly edge downward for the remainder of this year, and finish with a total of 1.93 million units.

Holding back on large purchases

We note some stabilization in household sales, with March purchases at their smallest y/y decline since October 2018, and with a rise in quarter-to-quarter following three consecutive quarterly declines. It’s likely that households held back on big-ticket purchases in the last quarter of 2018, due to losses in equity markets and an overall souring of economic sentiment.

However, we’re seeing a “soft floor” in the decline of retail auto sales, thanks to strong employment gains in January and February, and a marked recovery in financial markets. Nevertheless, we anticipate that household spending will slow in 2019, in line with a temporary soft patch in Canada’s economic growth, owing to government-mandated oil production cuts in Alberta and an anticipated slowdown of GDP growth domestically.

Fleet sales have been the main driver of the rise of deliveries we’ve seen so far in 2019, on the back of a sharp rebound from weak sales in late 2018. However, given the abnormally high fleet purchases seen in February and March, we anticipate that these will soften in the coming months. Overall, sales are still buoyed by light trucks, while cars saw their nineteenth straight month of y/y sales declines.

A double-digit increase in fleet deliveries in Ontario contrasted with an estimated decline of about 5% y/y in sales to households. Abnormally rough weather early in the year likely affected retail purchases, but we anticipate the province’s sales will decline for the year overall, as will all provinces, as the market softens from the record deliveries of 2017.

In Quebec, purchases dropped 5% y/y in March. The province’s economic growth is set to edge down from its strongest two-year expansion since 2001, although it should be assisted by new accelerated depreciation rules. That should support firms’ spending this year and next, and partially offset slowing export gains to the U.S.

Alberta recorded its tenth straight y/y decrease in March, although that month’s decline was the smallest drop in the first quarter of 2019. With uncertainty in the energy sector hampering hiring and investment plans, our latest forecast calls for an increase in real GDP of 1.2% in 2019, the province’s slowest growth pace since the 2015-16 provincial recession.

British Columbia’s auto deliveries contracted by 4.9% y/y in March, with household consumption still adjusting to provincial and federal housing policies that have led to fourteen consecutive months of y/y declines in home sales. With new mortgage rules and the economic support of a $40 billion LNG export terminal construction project, we expect that vehicle sales will lift off later this year.

In the U.S., purchases fell by 2.2% y/y in March, although they rose by a strong 5.9% m/m to 17.5 million annualized units sold. We expect this increase to be temporary, and that sales will trail down from the 17.2 million units sold in 2018, to 16.8 million in 2019, mirroring an overall deceleration in the country’s economic activity.

U.S. interest rates on new vehicles have risen quickly over the last year, to their highest point since early in 2011. The 60-month auto loan rate at commercial banks was 4.8% in March, up from 3.7% a year prior. Along with borrowing costs, reduced vehicle rebates and a broader shift toward larger and pricier vehicles have pushed the average monthly car payment up by 5.1% y/y in March, while weekly wages rose by only 3.2%.

In China, after six straight months of double-digit y/y contractions, March’s sales declined by 6.9%. After the lowest January and February sales totals since 2014, March saw a 29% seasonally-adjusted monthly increase in comparison. Chinese officials have taken stimulative measures to counteract economic weakness, which should help auto sales in the latter half of 2019.

In other global markets, Eastern Europe saw a slight boost from government subsidies in Russia; sales in Mexico look like they’re stabilizing; and we expect to see a rise in Brazil. However, a downshift in Western Europe’s economy, along with Brexit concerns, have dampened sales there, and a worsening economic outlook in Chile should dent its sales growth. For every up, it seems, there’s a down.

Mike Manley Steps Down as Head of Americas for Stellantis