Auto Sales Slow Down in Canada 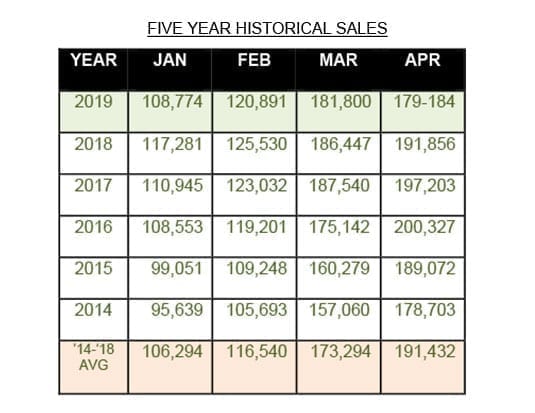 According to Global Automakers of Canada (GAC), April shows may have dampened consumer’s interest in purchasing new vehicles. April marks the fourth straight month of year-over-year (y/y) sales declines in the Canadian automotive markets for 2019. Sales for GAC members were down 1.7% to 107,383 units, while year-to-date sales were down 1.3% to 346,933 units.

However, these sale percentages are now only estimated as General Motors has decided to report sales quarterly. Actual sales will be released once a quarter to include GM sales too.

“April’s sales seem to reflect consumer confidence – which was down 6 points after three straight months of increases, according to the Conference Board of Canada,” said David Adams, President of Global Automakers of Canada. “That said, the industry is still looking at a year that is trending toward close to record levels, which is somewhat heartening as the market moves away from the peak of the sales cycle. Based on a range of estimates for the total market it would appear that April sales would also be below the five-year historical average sales for the month of April.”

The Ford F-Series pickup truck and the Honda Civic es were once again sales leaders in April, representing Canada’s best-selling vehicle and best-selling passenger vehicle respectively for the month.

Once again, GAC members had better-than-market results for the month with sales declined by 1.7%. GAC members also had a higher market share penetration at more than 59% compared to 56.9% in April 2018.