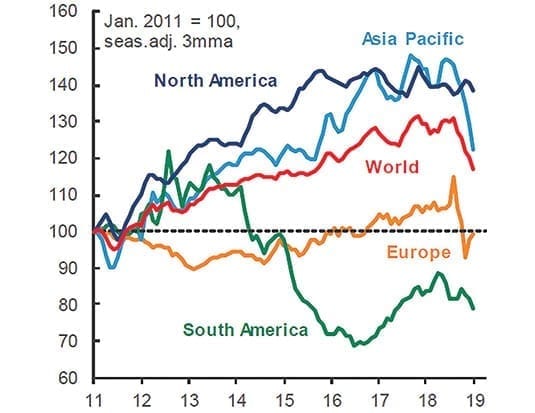 The global market has been volatile, and we certainly saw that in international markets around the world. With a few exceptions, most regions saw negative numbers in auto sales, and for numerous reasons—although the news isn’t entirely bad.

In Canada, sales fell 7.2% y/y when related to January of 2018 although, admittedly, that was a comparison with the best opening month we’ve ever seen. We still saw a solid increase of 4.4% month over month, leading to a SAAR (seasonally adjusted annualized rate) of 1.91 million units delivered. We are forecasting Canadian auto sales to post their fourth-highest year on record in 2019 with 1.93 million units. Our all-time high, of course, was 2.04 million in 2017.

In January, both Ontario and Quebec saw auto purchases drop by 6% each y/y, which may have been the result of poor weather in the second half of the month. In Atlantic Canada, sales fell by 1.7%; that followed significant weakness in the final quarter of 2018, when sales declined by 14% y/y on average. Alberta’s worsening economic conditions depressed sales, which dropped by 14% y/y in January, while Saskatchewan saw a contraction of 8%. Against a very strong and atypical rise of 57% y/y in January 2018, Manitoba’s sales for January 2019 plunged in comparison by 32%.

In the United States, auto purchases dropped by 2.1%, recording their steepest month-on-month contraction since January of 2011, when they fell by 5.1%. However, the decline we saw for January 2019 followed strong sales in the final quarter of 2018, and may have been exacerbated by especially nasty weather in the Midwest. Throughout 2019, we expect U.S. sales to decline by around 2% to a total of 16.8 million units.

In Mexico, January’s sales rose in year-on-year terms for the first time in twenty months, going up by 1.9% y/y. However, that’s in comparison to a very low base in January 2018, which in turn stemmed from an adjustment in how General Motors reported its sales at the time. If GM vehicles are taken out of the mix, Mexico’s sales in January 2019 fell sharply by 7.4%, following a market-wide drop of 10.6% y/y in December 2018.

Worldwide, combined auto sales fell by 9.9% y/y in January. That’s primarily due to China, which controls about a third of the global market, dropping 17.7% y/y in January and marking its fifth month of back-to-back declines. That said, sales tend to fluctuate significantly around the Chinese New Year, and as such, we advise considering January’s data in conjunction with that of February. Notwithstanding that statistical variation, though, government-led tightening of credit, combined with the U.S.-China trade war, are having an adverse impact on the Chinese auto market. We expect sales to remain flat in 2019, as this weakness in the early half of the year should be offset by improved sales activity later on thanks to government stimulus.

We saw a rise of 1% y/y in sales in Korea. The domestic automakers posted a 4.5 % rise in deliveries, but that was offset by a steep 25% drop in sales from German auto companies, which account for around 10% of Korea’s total sales.

Western Europe’s sales fell in January by 5%, although sales figures improved across most countries in the region following a decline of 8.6% y/y in December 2018. A deteriorating economic outlook is partly to blame, but sales in the European Union are also currently in a period of adjusting to new emissions testing standards introduced in September 2018. That new mandate led to a shortage of qualifying vehicles when it was introduced.

In Eastern Europe, auto sales fell by 12.1% y/y. An increase in sales taxes to 20% in Russia in January, up two percentage points, produced a sales gain of just 0.6%, the country’s weakest year-on-year performance since February 2017. Turkey saw its sales taxes decrease by 15 percentage points on passenger cars, but it wasn’t enough to offset a severe contraction in the country’s economic activity, and auto sales plummeted by 60% in January. That continues Turkey’s 2018’s full-year drop of 39%.

Brazil’s sales growth slowed but still remained strong, ringing in at a rise of 8.7% y/y in January. Peru’s sales rose by 3.8% despite a tax increase on new-vehicle sales, and the country has seen a nearly uninterrupted protraction in purchases since the tax was raised last June. But falling sales in Argentina and Columbia brought South America down to a total drop of 5.8% y/y. Strengths and weaknesses certainly played out around the globe for the start of 2019.