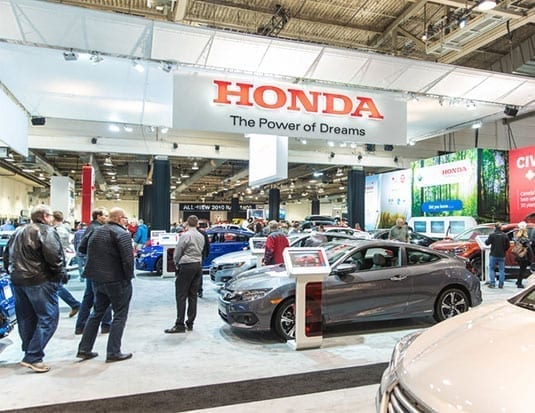 The 39th edition of the annual auto show has concluded.

The 2019 Calgary International Auto and Truck Show (CIATS) was hosted from April 17 to April 21 at the BMO Centre, Stampede Park, showcasing more than 250 top vehicles from 30 different manufacturers across the globe. The show occupied more than 250,000 sq ft with a smaller display specifically highlighting more than 16 of the newest hybrid electric vehicles.
“It’s 7,500 sq ft of space,” explains Jim Gillespie, executive manager of the Calgary Motor Dealers Association. “The area will have 13 hybrid electric vehicles all parked on green carpet. There’s plenty of interest in the electrics, and hybrids are currently very popular, and continue to grow in popularity.”

The event coincided with the Easter long weekend which Gillespie hoped would increase attendance numbers. There were also special day and Easter promotions, welcoming seniors, ladies, and everyday heroes, like firemen, police, EMS, and armed forces.

“Other than the really cool cars you will never see again, truly it’s the benefit of having all of these vehicles under one roof,” says Gillespie. “It’s a one-stop shop. You don’t have to drive all over the city. If you’re in the market for a vehicle, we have everything from a $20,000 entry-level vehicle up past $3.5 million.”

Joining them in the SUV category were the mid-size Kia Telluride, the Hyundai Palisade, the Honda Passport, and the Cadillac XT4 Crossover.

The event was also child-friendly as it hosted an Easter Egg contest, where children seven years or younger attempted to gain an egg with a golden ticket inside it to win a kid’s pedal go-kart. There were also contests for the adults as there was an opportunity to win a 2019 Ford Mustang EcoBoost Coupe.

Proceeds from this year’s event will go to the Alberta Children’s Hospital Foundation.