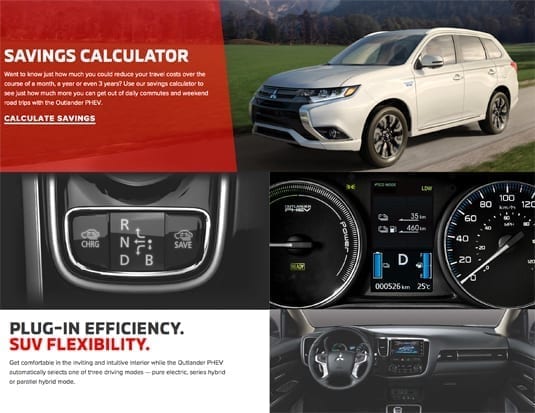 About 64% of Canadian Mitsubishi Motors dealers will be changing the way they look, according to the need global dealer visual identity program, to change its retail consumer experience across the country. Saint-Hyacinthe Mitsubishi was the first to undergo this change and will be followed by Ajax Mitsubishi in Ontario, Steele Mitsubishi in Nova Scotia and Charlottetown Mitsubishi in P.E.I. in the next few months.

“The response by Canadian dealers to the global visual identity program has been overwhelming,” said Juyu Jeon, President and CEO, Mitsubishi Motor Sales of Canada, Inc. “The pace of change for a new retail image will be quick and complement the exciting new products we have in store. What better dealer to begin this journey with than Saint-Hyacinthe Mitsubishi and Dominic Fortin, a dealer principal who is as committed to electrified vehicles as he is to his employees and the local community.”

Saint-Hyacinthe Mitsubishi has been around since 2005 as one of the first Mitsubishi Motor dealerships in Quebec and is one of the top Outlander PHEV dealers in the country. With the new building, the dealership now stands at 11,000 sq ft with a drive-thru service area and has ten electric charging stations to serve customers and EV owners.

The project took about ten months to complete, during which time the dealership remained open and maintained sales operations. The new building is double the size of the previous location and now employs 20 people.

“I started this business with blood, sweat, and tears even selling my car to buy my first used car dealership. To open this vibrant new Mitsubishi dealership that looks to every detail to make the customer experience better is rewarding,” said Dominic Fortin, Dealer Principal, Saint-Hyacinthe Mitsubishi.

The global dealership vial identity program, intended for 5,000 dealerships, was revealed in July 2018, focusing on the new brand image, “Drive you Ambition,” and enhancing the customer experience. The design features striking black, white and grey colour schemes with dynamic red lines as an accent. With more than 50% of dealers signed up to be a part of this program, with now 58 dealers undergoing renovations and new build and expand projects across Canada. Each dealership will be renovated using Canadian suppliers ranging from furniture to lighting to exterior elements and using efficiency and sustainable measures such as LED lights.

To mark the Grand Opening, Mitsubishi Motor Sales of Canada presented its annual donation of $100,000 to Breakfast Club of Canada, a charitable organization committed to providing children with a full nutritional breakfast before the school day. Daniel Germain, President and Founder, Breakfast of Canada accepted the donation.