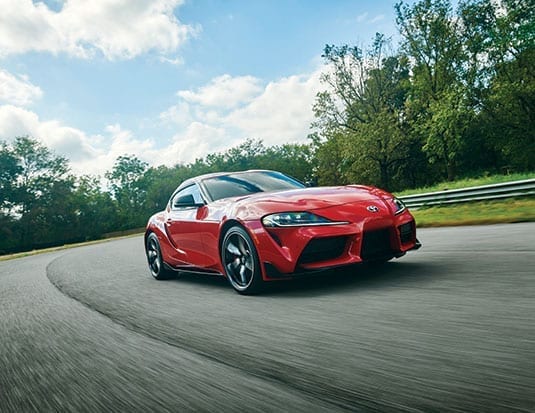 After an absence of more than twenty years, the Toyota Supra is coming back. The name was first used on the Toyota Celica Supra of 1979, and over four generations, it won the hearts of fans. Toyota now expects it to have an equally warm welcome when the two-seater returns to showrooms for the 2020 model year.

“There’s a strong group of Supra loyalists who’ve been asking year after year when it’s coming back,” said Stephen Beatty, Corporate VP, Toyota Canada. “The challenge is making sure to bring out a vehicle that meets those expectations and then exceeds them. The best way is to make sure your number-one Supra fan is the president of Toyota Motor Corporation. Akio Toyoda learned how to be a master driver behind the wheel of a Supra, and he wanted to make sure that when we brought it back, it reflected everything Supra was meant to be.”

The Supra was developed in collaboration with BMW, which will market it as the Z4. “We’d had a longstanding series of arrangements with BMW over the years,” Beatty said. “I think you need a partner to be able to amortize the investments in some of the basic technology that’s required to build a car of this sort. The cost of developing unique platforms is high and the global market for them is smaller, so that partnering is important if we’re going to see these types of sporty vehicles coming to market.”

While the two automakers worked together on the initial engineering, they operated independently on the final four years of their vehicles’ development. The Supra is a coupe, while the Z4 is a convertible, and those configurations helped to shape each one: with the rigidity provided by its fixed roof, the Supra became a pure sports car, while the Z4’s drop-top meant drivers would consider it more of a touring car. At the moment, Toyota has no plans to offer its Supra with a fold-down roof as well.

The Supra will arrive in Canada in a single, well-equipped GR trim level, priced at $64,990. That’s more than the entry point of the Z4, which will start at $62,450 in Canada, but the two are not comparable, Beatty said. BMW is launching the Z4 with two engines: the base price is for a 2.0-litre four-cylinder, while a six-cylinder-equipped model will start at $76,100.

The Supra will come only with the 3.0-litre turbocharged inline six-cylinder, making 335 horsepower and 365 lb-ft of torque, and with an eight-speed automatic transmission. “We expect our customers will want that,” Beatty said. “We can look at the four in future, but let’s see how the world responds. I’m not sure there’s space for that in the market, but we’ll see.”

Toyota won’t reveal its specific sales goals, but Beatty said, “We’ll count it in the hundreds, not the thousands. The hard truth of sports cars is that they are really popular in their first year, and the issue becomes how you sustain that popularity over the lifetime of the car.

“We’ll be working hard to ensure the experience people have is high to sustain that demand over time. We’ll reflect that through social media channels, public relations—all the ways we get our message out to true enthusiasts.”

Any store will have the opportunity to carry the Supra, although there will be up-front expenses of training and tools to service the car’s BMW-derived powertrain. “Dealers will make sure there’s sufficient market potential to have the vehicle on the lot, but I don’t know of any Toyota dealer who wasn’t excited to have Supra back in the lineup. It’s one of those cars where the head and the heart have to compete.”

The Supra will sit above Toyota’s other sports model, the 86 (formerly the Scion FR-S), a popularly-priced car developed in collaboration with Subaru. “Sports cars became so sophisticated that they became really expensive. The intention with the 86 was to build a 2+2 that would help re-popularize sports cars, and I think it has done a good job.

“As 86 drivers move into a different life stage and their incomes change, there’s an opportunity to look at Supra,” Beatty said. “The buyers are not interchangeable at the same life stage. The opening price points of the cars are significantly different, and they’re targeted to different buyers. That said, we’ve tried to keep Supra as affordable as possible. It’s not a limited-edition supercar, but something you can sell into the mainstream of the sports car market and uphold the Toyota name.”

The Supra is the culmination of Akio Toyoda’s desire to breathe new life into the company’s lineup, Beatty said. “There’s a much more spirited, much more fun aspect to Toyota than ten years ago. Across the lineup, the designs are changing, and handling is changing as we launch the new global architecture platform. It’s fascinating to see how the company managed to push that aspect, but also push safety technologies, and new types of connectivity. Supra is a new opportunity to bring that excitement not just to the people who buy it, but everyone who buys a Toyota.”