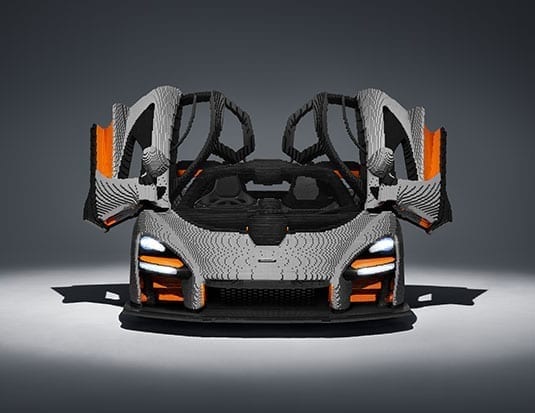 An exceptional 1:1 scale LEGO version of the McLaren Ultimate Series road car was recently unveiled. It has become the first interactive LEGO vehicle that incorporates authentic interior parts, like the seat, steering wheel, and pedals, from a real Senna. Actual McLaren badges are fitted, and the wheels and Pirelli tires are precisely like the ones on the actual car.

While the car cannot actually be driven, it still provides entertainment for all ages. The dihedral doors are made from LEGO bricks and are removable to allow people easy access to the cabin. Car enthusiasts can climb inside, sit behind the wheel, push the start button (located in the roof) and hear a simulation of the 450kph car roaring to life. The LEGO Senna’s lights and infotainment systems are also operational.

The full-scale LEGO McLaren Senna was constructed with exactly 467, 854 individual LEGO elements and weighs 3, 348 lbs, which is 1,102 lbs more than the McLaren Senna that sold out as soon as it was announced in 2017.

Working in shifts around the clock, it took 42 men and women from the LEGO build team a total of 4,935 hours to create the model, including design and development. Almost 2,725 of those hours were needed to click the pieces together, which is about the same amount of time it would have taken to hand-assemble nine real McLaren Senna vehicles.

The LEGO vehicle took months of design and development work by both McLaren and the LEGO team. Its brick-work is finished to replicate Victory Grey with contrasting orange highlights, reproducing the 5-inch long, 219-piece, McLaren Senna KEGO Speed Champions editions that were sold in toyshops for $14.99 on a much grander scale.

McLaren and LEGO fans will be able to experience the car at a variety of events throughout 2019, including the Goodwood Festival of Speed in Sussex, UK, in early July.