Plugging Into the Future 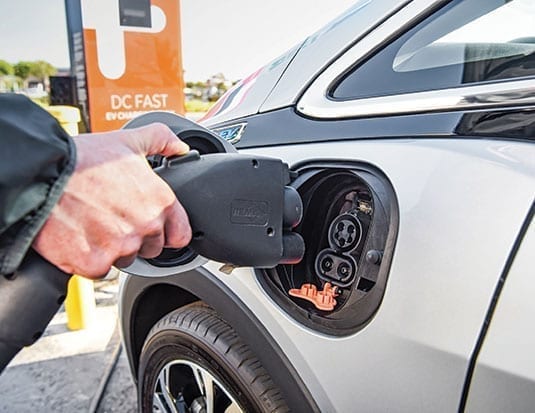 With B.C. planning to mandate zero-emission vehicles, dealers will need to prepare for a new reality.

British Columbia is serious about “green,” and recently unveiled some details of its CleanBC plan for major environmental changes. Along with increasing the low-carbon fuel standard and more renewable fuels, the initiative calls for increased tailpipe emissions standards for vehicles sold after 2025.

But the biggest change, and the one that’s really going to affect dealers, is a requirement by 2040 that every new car sold be zero-emission. It’s still a long way off, but to reach it, there will have to be a steady progression of incremental changes by automakers, dealers, and ultimately customers.

Zero-emission vehicles, or ZEVs, include those powered by batteries or by hydrogen fuel cells. At the moment, they still make up only a sliver of the Canadian market.

Infrastructure is, of course, an issue for many drivers. “The biggest challenge immediately is apartment and townhouse dwellers,” said Grant Chitty, Account Manager and Executive for Foss National Leasing. “It’s a lot easier to install in single-residence dwellings, but when you’re in an apartment building, there’s going to need to be quite a paradigm shift.

“I’m noticing there are a lot more charging stations popping up in locations you might not necessarily expect them to be. I live next to a mall that has twelve high-speed charging stations, but if the goal is to have (ZEVs) in 20 years, they’ll have to develop a plan that the infrastructure is in place.”

Among the roadblocks that zero-emission vehicles have historically faced are “chicken-and-egg” scenarios. Their lower-volume production makes them relatively pricey, and because they are, they’re not selling in the large numbers that would help bring their prices down. With fewer recharging centres than gas stations, many customers with “range anxiety” opt for gasoline.

ZEVs also make more sense in the city, but the mandate will be province-wide. “The province will focus on (infrastructure), but if you can’t take your family (on a drive) and trust that you can plug it in, that’s a problem,” said Sara Church, District Manager for Western Canada for ARI. She adds that right now, the requirement is mostly a theory, and governments will have to figure out how to actually make it work. “I haven’t seen anything that would penalize an OEM for not meeting these regulations, or how the program will be enforced. I’m waiting to see that.”

Carrots work better than sticks, but electric-vehicle sales took a hit after Ontario eliminated its ZEV incentives when a new government took office. Of the three provinces offering rebates, along with B.C. and Quebec, Ontario was the most generous with incentives that reached as high as $14,000. Currently, BC’s Clean Energy Vehicle (CEV) Program provides rebates of up to $5,000 on electric, plug-in hybrid, and extended-range vehicles, and up to $6,000 on hydrogen fuel cell vehicles, plus rebates for charging stations. However, the program is scheduled to end on March 31, 2020, or when funding earmarked for it is exhausted, and dealers will have to wait and see what, if anything, replaces it.

And while it’s not as likely that any new British Columbia leadership would scrap every existing environmental program, there’s always a possibility that change at the top—as happened in Ontario—could have some effect on the ZEV-by-2040 mandate, which could potentially leave automakers and their dealers in limbo with supply and demand.

Enough ZEVs for all

As the mandate nears, automakers will also have to determine how they allocate vehicles at various levels. ZEVs can’t be funnelled exclusively into British Columbia to meet the requirement if that leaves other provinces high and dry. And within the province, car manufacturers—and dealers— must determine who gets precedence.

“I had a lineup of (fleet) clients when the (Chevrolet) Bolt was released that said, ‘Get me some,’ but I couldn’t get allocation for fleets,” Church said. “We saw (similar) challenges with Quebec’s winter tire law, and we had a problem with allocation of tires.”

There are a lot of unanswered questions that will have to be addressed as the deadline for the mandate eventually grows closer. How will the regulation affect manufacturers, especially niche-market ones, that don’t have a wide range of ZEVs to offer? Will the program use a credit-based system to accommodate them? And how will the program accommodate heavier-duty vehicles like trucks and commercial vans?

At the retail level, dealers will gradually have to ramp up their repair facilities to include more focus on electric vehicles, including tools and training. They’ll likely also have to implement marketing strategies for the conventional vehicles that will populate pre-owned lots for some time after the ZEV-only mandate arrives.

Battery end-of-life will also have to be considered, and just as with other consumables, dealers will need to know they’ll have access to a reliable recycling stream that isn’t currently in place. Twenty years seems like a long time, but there’s a lot to be done before the ZEVS are “it.”