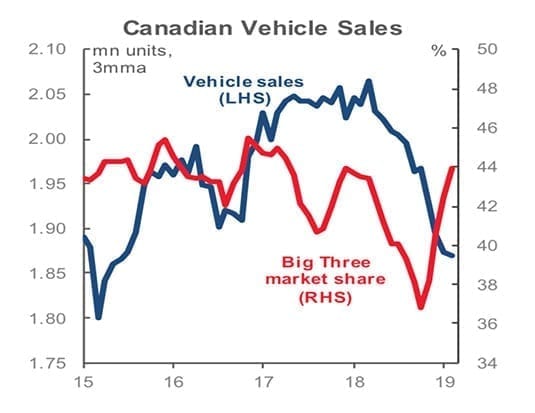 While auto purchases in Canada rose by 2.6% m/m to 1.96 mn annualised units delivered in February, in year-to-year terms, sales are down 5.4% when compared to last February.

The year-on-year drop is expected and shows that the Canadian auto market appears to be moving toward a medium-term plateau of about 1.9 mn units sold per annum. Scotiabank Economics’ forecasts vehicle sales to total 1.93 mn units in 2019.

According to Scotiabank Economics, Fiat-Chrysler (FCA) had four straight months of double-digit year-on-year (y/y) declines with a 2% y/y drop in February; there was an improvement in deliveries of Jeep and Dodge vehicles, selling 211 units more than Ford. This small increase in sales helped FCA displace Ford as the sales leader for February. However, the Ford F-series pick-up truck and the Honda Civic es were once again Canada’s best-selling vehicle and best-selling passenger car respectively for the month.

With Ford’s and GM’s respective declines of 1.3% y/y and 9.1% y/y in February, unit sales at the Big Three automakers fell by a combined 4.1% y/y. Hyundai and Kia handsomely outperformed the rest of the market with unit sales increases of 15.8% y/y and 10.5% y/y, in that order.

“These results are not unexpected,” said David Adams, President of Global Automakers of Canada (GAC).  “Both January and February last year were very strong months, so it was always going to be a tough act to follow.   Also, when you factor in the significant snow and weather events that have occurred over the month of February across the country, the results are actually pretty good.”

Trucks sale rose 1.2% while passenger car sales dropped by 16% in February. At the moment, trucks represented a record 75.1% of overall sales last month.

Members of the GAC had better-than-market results for the month with sales falling 3.4% compared to the market’s 3.7% drop. Market share penetration was also higher this year for GAC members at 56.1% compared to 55.9% last February. GAC members’ overall sales for the year in February were 67,830 units.