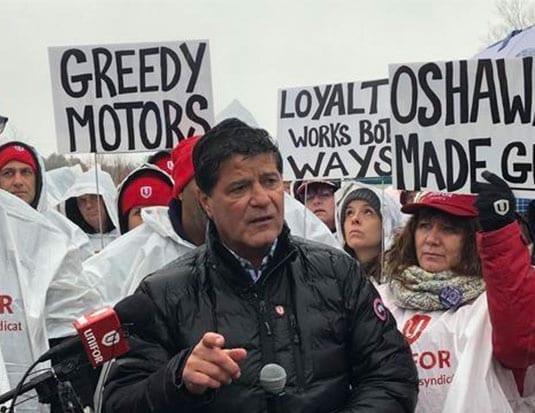 Unifor is encouraging a boycott of all Mexican-made GM vehicles to protest GM’s decision to shut-down Canadian production, and in turn, “abandon[ing]” and “betray[ing]” its workers.

In 2014, GM confirmed its decision to spend US $5 billion to expand and double its production in Mexico. Now, with the announcement of the Oshawa plant’s closure by 2020, annual production in Canada is expected to decline by 67%–that means 418,000 fewer vehicles. This change will also cause thousands of Canadians to lose their jobs.

Subsequently, production in Mexico will increase by 47%–to be exact, by 304,000 vehicles. While this transfer will increase Mexican jobs, there seems to be a broad consensus that GM is exploiting the workers by taking advantage of the low pay and the lack of human and labour rights in Mexico.

As a result, Unifor has dubbed GM as “Greedy Motors.” Unifor National President, Jerry Dias said that the company is “walking away…to inflate profits by paying Mexican workers poverty wages,” before the Canada-United States-Mexico Agreement (CUSMA) is put into effect.

“GM is arrogant enough to think it can rob Canada of jobs without repercussion. GM is choosing to increase manufacturing in Mexico while it abandons communities that have supported it for generations. But make no mistake, Canadian and American consumers also have a choice.”

The boycott call asks consumers for their support by limiting their purchases to only North American union-made vehicles, providing them with a 2019 Unionized Vehicle Guide for GM products.

“We’re asking all Canadians to take this stand in defense of our jobs and in defiance of international corporations that seek to raise profits by lowering the bar for workers,” said Dias.

Unifor also created a commercial for consumers to help them identify which country a vehicle is made in by its VIN–effectively starting the “VIN 3” campaign; if the VIN begins with the number “3”, then it was made in Mexico. This knowledge emboldens consumers to tell GM and their local dealerships that they will not purchase Mexican-made GM vehicles. The commercial ends with the statement: “GM – you want to sell here? Build here.” To watch the commercial, click here.

VIN 3 is reckless and not thought through. GM Canada only imports 3 models from Mexico out of 47 we sell in Canada. Unifor’s proposed boycott attacks their own members in Ontario who make parts for Mexico at GM Canada & over 60 Canada-based suppliers. https://t.co/kDWnb834kI

Moreover, the Ontario Public Service Employees Union (OPSEU) has also decided to join the fight by supporting the boycott and standing in solidarity with Ontario workers who will lose their jobs at the end of 2019.

“GM’s greed will throw thousands of Ontario employees out of work and hurt our economy,” said Warren Thomas, President of OPSEU. “We tried to talk; now it’s time to act. GM is giving us no choice. We have to hit them where it hurts – their bottom line.”

A recent poll released by Unifor indicated that 45% of Canadians are supporting an outright boycott of GM, and another 26% are strongly considering supporting the boycott. However, the two unions have made it clear they only want to target Mexican-made GM vehicles. This clarification was put into place as both unions are aware that the boycott could have repercussions for union members working at other GM plants in Canada.

GM Canada’s Vice President, David Paterson responded to the call for a boycott, saying “the threat of collateral damage for Ontario based auto suppliers, auto dealers and workers is concerning, especially for an Ontario economy that is now open for business, with every opportunity to now benefit from increased trade with Mexico.”

If successful, the boycott would affect over 60 Ontario-based auto-parts companies supporting production in Mexico. For example, the transmissions produced in St. Catharines and stamp body panels produced in Ingersoll that go into Mexican-made vehicles and later sold in Canada, will be affected.

Unifor’s idea of a boycott of Mexican-made vehicles risks collateral damage to our economy, including GM Unifor members who work in St. Catharines and Ingersoll. It is time to come to the table and work out a transition plan. https://t.co/LhT0nV13cp

The company also reminds consumers that GM has invested more than $100 billion into Canada through manufacturing, purchased goods and services, and over $8 billion invested in worker pensions. Furthermore, they are creating more than 1,000 jobs for next-generation automotive engineering, software and testing work in Oshawa, Markham, Kapuskasing and soon in Toronto.

Since 2009, GM has shown our commitment to Canada by reinvesting more than $100B in manufacturing, purchased goods & services, over $8B invested into worker pensions & created Canada’s largest automotive software engineering workforce for the future. https://t.co/5fRjDPZnoH pic.twitter.com/d4i0UNA8u5

GM restated that it has allocated millions of dollars to assist Oshawa plant workers with retraining at community colleges or Universities in Durham, and providing continued health care coverage and general benefits, and it will continue to stand by and support its workers until they have settled into new jobs.

GM remains deeply committed to investing in Canada’s vibrant auto sector for the future. We have invested over $100 Billion in Canada since 2009. Learn more here: https://t.co/kDWnb834kI pic.twitter.com/FkSyZz56qI