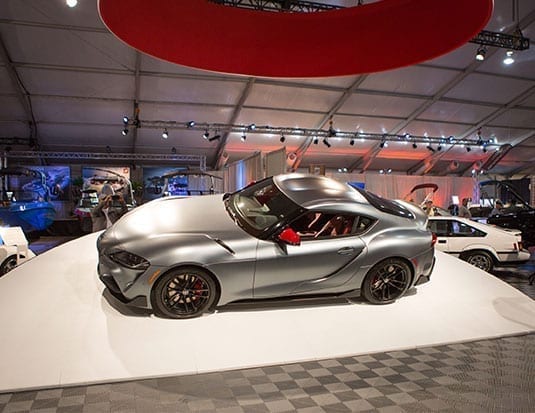 The first production of the new 2020 Toyota GR Supra was auctioned off for charity and sold for $2.1-million U.S. at an auction, in Arizona.

This first Supra will have a VIN that ends in 20201–with “2020” representing the year it made a comeback and “1” marking it as the first vehicle to roll off the production line.

“We did the first production 2020 GR Supra justice tonight at Barrett-Jackson,” said Bob Carter, executive vice president of sales, Toyota Motor North America. “When Toyota launches a vehicle of this caliber, you only get one chance to do it right–and this auction was the perfect setting. After 20 years, this marks the return of a legend.”

All proceeds went to support the American Heart Association (AHA), which is committed to fighting heart disease and stroke, and the Bob Woodruff Foundation, which funds programs for veterans and their families impacted by 9/11.

“The incredible excitement of the Supra rolling across the block was felt by everyone in the arena. This was a moment that was 20 years in the making. More importantly, we’re thrilled to have joined with Toyota in their efforts to raise funds in the fight against heart disease and stroke,” said Craig Jackson, chairman, and CEO of Barrett-Jackson.

The winning bidder received many perks, including a full VIP race track experience that came with a customized professional racing suit, two VIP passes and hot passes to TOYOTA OWNERS 400–Richmond Raceway, and a chance to drive the pace car and do laps with Michael Waltrip.