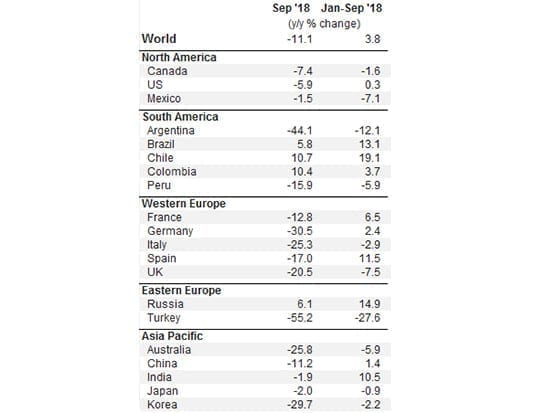 Fleet sales offset retail drops in Canada, as we head towards the end of 2018.

Although there’s some underlying optimism overall, September recorded some very steep sales drops in many global markets. This was the result of various external factors in several markets, and a year-over-year drop from a high point twelve months before in others.

Canadian auto sales saw the sharpest decline in almost a decade, falling 7.4% against the September record high we marked in 2017. Deliveries fell by 3.7% in month-on-month seasonally-adjusted terms, the biggest decline since April 2018 when adverse weather conditions limited purchases. September marked the seventh consecutive y/y drop in sales, creating a year-to-date contraction of 1.6% over the same nine months in 2018.

We’re forecasting a 2% decline for full-year 2018 sales. That should bring us to an even two million units, down from the record 2.04 million we saw in 2017.

Retail sales are down in more than just autos

Mind you, those falling numbers were not across-the-board. Instead, a pronounced drop in retail was offset by a rise in low-margin fleet sales. Household vehicle purchases declined by around 2.5% year-to-date to September, while fleet deliveries climbed by roughly 5%. And the drop among retail buyers isn’t just in the auto market. Excluding vehicles and parts, retail purchases overall expanded by only 1.1% year-to-date, in stark contrast to 5.2% in the same period last year in inflation-adjusted terms.

Rising gas prices and higher interest rates have pushed spending on fuel and debt repayments to around 10.5% of disposable household income, compared to 9.6% twelve months ago. While nominal wages have increased at a relatively strong pace, real earnings growth is in negative territory for the first time since March of 2017. Add in higher interest rates to all of that, and you have some would-be buyers rethinking a visit to the showroom right now.

Of all the provinces, only Ontario and Manitoba have seen a rise in year-to-date vehicle purchases – and even then, Manitoba’s upswing is almost entirely attributable to an anomalous surge in fleet purchases that seems out of line with economic fundamentals. Alberta has seen post-recession household spending gains slow down, while British Columbia has had the largest shift downward in sales growth, likely owing to a strong deceleration of employment growth.

A plateau south of the border

In the United States, auto purchases dropped by 5.9% y/y from strong sales during the previous September when buyers were replacing vehicles lost to Hurricane Harvey. Vehicle purchases rose by a strong 4.6% on a month-on-month seasonally-adjusted basis, but the average increase for the year is essentially flat. This confirms our view that the U.S. auto market is plateauing, although 2018 remains close to the 17 million mark, down only slightly from the 17.1 million sold in 2017.

American automakers are beginning to feel the pain of the Trump administration’s tariffs on steel and aluminum imports, with Ford—the country’s second-largest automaker—claiming the tariffs have cost it around $1 billion USD in profits. The price of electronic equipment in automobiles has climbed by 0.6% since December, but prices on motor vehicle bodies and trailers, which have high aluminum and steel content, have gone up by 3.4% during the same period.

Europe is up and then down

Mexico saw its sixteenth consecutive y/y drop in September, but that month’s fall of 1.5% was the smallest annual decline during this period. The country’s economy has moved past the impact of the political and economic uncertainty prior to the July presidential elections and the renegotiation of NAFTA. Mexico’s auto sales are down 7.1% y/y, but the latter third of the year should show better results and a combined annual decline of about 3%.

In Europe, things went up and then right back down again. Sales in August surged by 26.5% as dealers worked to clear their showrooms and buyers rushed to get these deals ahead of new emissions standards that would come into effect in September and affect some of the stock still left on the lots. In September, with the new regulations in place, those gains were offset by a drop of 23% y/y. Nevertheless, total sales in the third quarter, excluding the U.K., were up by 2.4% y/y and are still tracking a relatively strong increase of 3.3%. Brexit is still a cloud over sales in the U.K. and auto purchases were down a sharp 7.5% for the first nine months of 2018.

China marked its first three-month losing streak since late 2008, with auto sales falling by 11.2% y/y in September. The drop in sales appears to be driven by a credit slowdown as the government seeks to end excessive borrowing. After a strong start, sales in 2018 might be only slightly above 2017’s levels. It’s certainly turning out to be an interesting year as 2018 heads toward its finish.