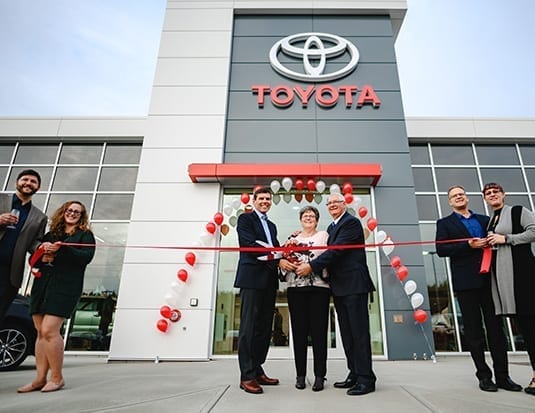 Customer service is paramount to this northernmost Toyota dealer.

After almost fifty years of providing small-town-style service, Whitehorse Toyota now blends in a big-city dealership. In September, the company cut the ribbon on a brand-new facility that’s more than double the size of the previous location.

“We’re the only Toyota dealer in Whitehorse, and the northernmost Toyota dealer in Canada,” said General Manager Holly Wilcox. “This is our third location but it’s our first brand-new facility. The city has changed and we were not able to expand the way that we needed, so we had to find a new location.”

The dealership opened in 1970 as Mic Mac Toyota, named for owners Joe Micka and John MacKinnon. Ken Mason, Wilcox’s father, bought into the franchise in 1974 with a partner, and in 1985 became the sole owner.

Growing with the city

Mason changed the name to Whitehorse Toyota when he built a new store—and never thought the business would ever outgrow it, Wilcox said. He’s still the dealer principal, but in 2007, Wilcox took over the day-to-day operations. “I always wanted to run the dealership,” she said. “When I was younger, I did lot attendant, parts delivery, customer shuttles, and I worked on and off in service and parts.”

The new building includes a 2,700 sq ft showroom with space for six vehicles, with television and Internet facilities in the lounge, and a tech centre that highlights Toyota’s vehicle features and safety. “We’ve had a lot of customers come in and say, ‘It’s like a dealership in Edmonton or Vancouver,’ and I think that’s a big deal,” Wilcox said.

The opening ceremony was attended by Larry Hutchinson, President and CEO of Toyota Canada. A previous president also opened the new store in 1989. “We’ve had fantastic support from Toyota,” Wilcox said.

A vital part of the community

There are fewer than 40,000 people in all of Yukon, and Wilcox ensures that her store retains its local hometown community spirit. “We know a lot of our customers. We see them when we’re grocery shopping or downtown. They’re not just a number or a name on a screen, but they’re more like our friends in a sense.

“We like to sponsor things within our community. We’re an ongoing sponsor of the Special Olympics, because we have athletes in the community.” The dealership is also a long-time sponsor of the annual Yukon Sourdough Rendezvous Festival, and in 2017, Ken and Sandra Mason were crowned Mr. and Mrs. Yukon at the event.

Sponsorships get the dealer’s name out there, but that isn’t why Wilcox does it. “We’ve never sponsored anything just because of the publicity. You sponsor because you’re in a small community, and everybody has to pitch in to make these happen. It’s good for the community.”

While the store faces the usual day-to-day challenges as other dealerships do, being so far north means that orders have to be especially accurate and timely. “For the most part, people in town are within a half-hour drive, but if they’re from outside communities, they can be five or six hours away,” Wilcox said. “We have to make sure we have parts for them. It’s not like we’re in downtown Vancouver, and if we forgot to order something, or something wasn’t shipped, we can just drive to Toyota and pick it up.

“We have policies in place to make sure the guys know what needs to come and how long it will take, and we book the customer accordingly.”

In addition to customers, Wilcox also makes sure she looks after her staff. “We’ve got a pretty decent crew. I’ve got two journeymen technicians who’ve been with us over 20 years, and several of our employees have been here over five years. We don’t have a large pool of people to pull from when hiring, and when we find them, we like to keep them.

“We live in a part of Canada where we have great access to hunting, fishing, hiking, snowmobiling and other outdoor things. We all work to make some money for our fun times, and we give our staff the flexibility of time off when we can so they can go and do the things they like to do.”

Most of Whitehorse Toyota’s business is in trucks and SUVs, but “we have more and more people getting into the hybrid market now. Our trends tend to follow behind the bigger cities, and so where Vancouver, Calgary and Toronto were five years ago is kind of where we are now. It’s a learning curve for customers.”

The 25,000 sq ft store is now a showpiece in the city. “We always try to do better today than we did yesterday,” Wilcox said. “Customer service is of the utmost importance to us.”