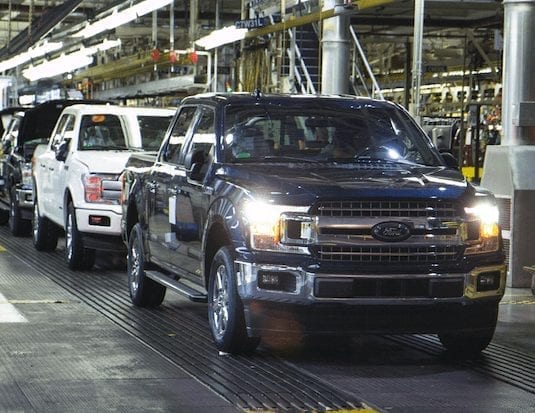 Given the trends in vehicle demand witnessed over the last 12 months, it probably wasn’t surprising that sales were down overall in 2018.

For the first time in over a decade, automotive sales fell slightly in Canada in 2018 with final figures coming in at 1,984,992 down 2.6 percent from 2018.   December contributed to the overall lower numbers for the year with 114,289 units sold for the month down 8 percent.

According to the most recent Scotiabank Global Economics Auto News Flash, the lower volumes seen in 2018 were driven by rising interest rates, slower economic growth and modest employment gains.

Scotiabank says that vehicle demand is expected to continue softening in 2019 to around 1.93 million units, as a result of expected interest rate hikes, tighter lending rules and largely flat job growth.

Among automakers, Ford led the way in terms of overall sales in 2018, driven by its ever-popular F-Series pickups. Even still, Detroit automakers saw their share of the Canadian marketplace decline from 43.1 percent to 40.9 percent.

FCA in particular, witnessed sizeable volume declines, with 2018 sales totals down by 32.5 percent year-over-year. Production setbacks with its RAM pickups, as well as steep declines in minivan and sedan sales contributed to the lower volumes.

“Given all of the political and economic turbulence—combined with interest rate increases – it is difficult to classify the 2018 as disappointing from a sales perspective,” said David Adams, President of Global Automakers of Canada.

Adams also noted that, “members of Global Automakers of Canada, had better-than-market results for each month of 2018, and made impressive gains in market share.”