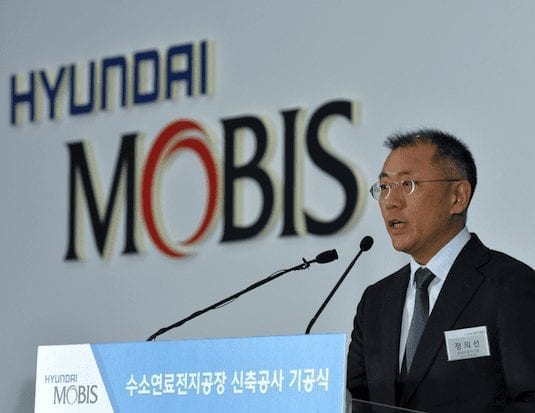 Hyundai Motor Group (which owns both Hyundai and Kia automotive brands) has announced a long-term commitment to fuel cell technology.

The ‘FCEV Vision 2030’ plan is designed to leverage the group’s global leadership in fuel-cell technologies.

As part of this commitment, Hyundai Motor Group says it will significantly increase its annual fuel-cell systems production capacity to 700,000 units by 2030 and explore new business opportunities to supply its world-class fuel-cell systems to other transportation manufacturers of automobiles, drones, vessels, rolling stocks and forklifts.

Demand for fuel-cell systems from sectors outside transportation, including power generation and storage systems is also expected to see significant growth.

“Hyundai Motor Group is taking a bold step forward to expedite the realization of a hydrogen society,’’ said Euisun Chung, Executive Vice Chairman of Hyundai Motor Group. “We will expand our role beyond the automotive transportation sector and play a pivotal role in global society’s transition to clean energy by helping make hydrogen an economically viable energy source. We are confident that hydrogen power will transcend the transportation sector and become a leading global economic success.”

The ‘FCEV Vision 2030’ roadmap aims to help Hyundai Motor Group and its suppliers invest approximately KRW 7.6 trillion ($9 billion CAD) in R&D and facility expansion, which is expected to create approximately 51,000 jobs by 2030.

As the first step to fulfill the ‘FCEV Vision 2030’, HMG’s fuel-cell system manufacturing affiliate Hyundai Mobis Co.  held a groundbreaking ceremony for its second fuel-cell system plant in Chungju, South Korea on December 11. The second factory will help Mobis increase annual fuel-cell system output to 40,000 units by 2022, up from the current 3,000 units.