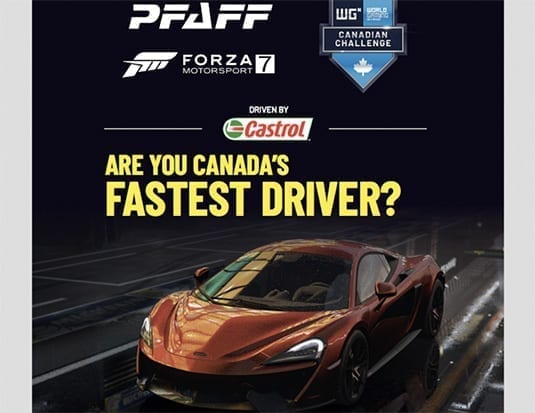 At the 2018 Canadian International Show (CIAS), attendees will get the chance to experience a unique form of motorsport competition.

Thanks to Pfaff Automotive Partners, Xbox, Castrol, Cineplex and WorldGaming, CIAS attendees will be able to experience the thrill of Forza Motorsports 7 from the driver’s seat—with a national championship, $20,000 in prize money and a once-in-a-lifetime chance to race with Pfaff Motorsports on the line.

Canadians over the age of 14 who have access to an Xbox One are eligible to compete in the Pfaff Forza Motorsport 7 WorldGaming Network (WGN) Canadian Challenge, driven by Castrol.

There are two ways for contestants to join:

At the live qualifier, attendees will be able to use VRX racing pods designed to give gamers an all-enveloping racing experience. The Grand Finals will be staged live, February 24 at the AutoShow in the Metro Toronto Convention Centre.

“Esports is the fastest growing feature at the AutoShow and the fastest-growing attraction in sports entertainment,” said Jason Campbell, General Manager of the AutoShow. “Hosting the Pfaff Forza Motorsport 7 WorldGaming Network Canadian Challenge, driven by Castrol adds another level of excitement to the attraction.”

The 2019 esports exhibit at the AutoShow will be nearly double the size of last year’s showcase. Produced by Cineplex, WorldGaming, Pfaff, Castrol and Xbox, the esports activation will bring together gamers of all ages and skill levels to test their speed on Forza 7.

“We’re very excited to partner with WorldGaming for the second year in a row to engage with racers, virtual and real, across the country,” said Laurance Yap, Creative Director at Pfaff Automotive Partners.

“The Canadian Challenge bridges the gap between the virtual and real racing worlds—the winner of the tournament will have the chance to test a Pfaff race car in 2019 and become part of our company’s long history of developing Canadian driving talent. Holding the tournament live at the auto show, with nine days of live qualifiers, and a one-day live final, really takes the championship to the next level.”