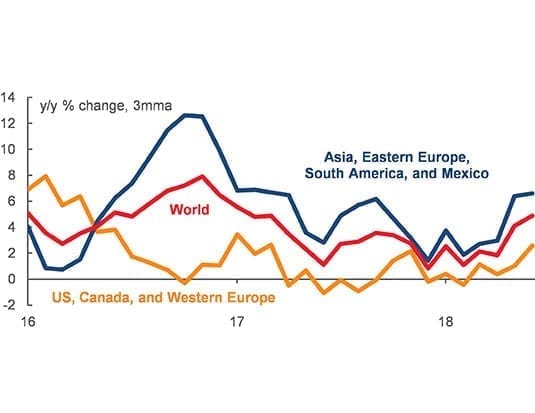 Trade uncertainty is still elevated across North America, but incoming data suggests the Canadian economy has been more resilient to Trump policies than earlier thought, alongside strong business investment domestically and a solid pace of expansion in the U.S. Canada’s new-vehicle sales remain near record high levels and are only set to post a slight decline in 2018, and sales in the United States are expected to do the same.

We are increasing our GDP growth forecast to 2.2 percent, from the 2.0 percent we predicted in July. Despite rising interest rates and a cooling of consumer confidence, household consumption is stronger than expected due to strong gains in disposable income on the back of continued strength in the labour market and rising wages.

However, that increase was measured against weak auto sales in the first half of 2017, which was partially due to poor fleet sales figures. The second half of 2017 saw auto sales rise overall, with some of that due to customers purchasing vehicles to replace those lost in disasters including Hurricane Harvey in Texas. However, with the first half of the year building only on soft sales from the previous year, we expect to see U.S. sales flatten out for the yearly 2018 totals.

Worldwide, global auto sales expanded at a solid pace in the first half of 2018; the stronger U.S. sales helped with that, as well as strong gains in emerging economies. However, we are seeing some cracks in a few places. The Chinese auto market seems to have been affected by the threat of rising U.S. protectionism, while vehicle purchases in Brazil and Argentina have slowed in recent months, amid a loss of economic momentum.

Vehicle sales in the core of Europe are split. We’re seeing robust growth in France, Germany, and Spain, but in the United Kingdom and Italy, where political uncertainty is denting household confidence, sales are declining.

Tariffs still up in the air

In late July, the European Commission President Jean-Claude Juncker announced with President Trump that the United States and the European Union will hold off on the imposition of additional import tariffs, namely on autos, as the two look at negotiating freer reciprocal trade. However, this does not indicate an official start to trade negotiations, and does not dismiss tariffs already in place on steel and aluminum products or related retaliatory measures. The U.S. targeted the European Union due to a 10 percent MFN tariff that Europe levies on automobile imports from countries with which it does not have a free trade agreement.

Last year, the U.S. exported more than 250,000 vehicles to the EU, but around 1.2 million units came into the United States from Europe. The current tariff is 2.5 percent, but if it swells to as high as 25 percent, as has been threatened, then Audi, BMW, and Daimler would face significant headwinds in the American auto market, since between two-thirds and three-quarters of their unit sales in the U.S. are imported from outside North America. Volkswagen is a notable exception since 63 percent of the vehicles it sells in the U.S. are assembled in Mexico, which would lessen the blow if tariffs are not imposed on America’s partners in NAFTA.

Over the first six months of 2018, rising sales in Ontario and, to a lesser degree, in Quebec helped offset the sharp contraction that we saw in the Western provinces. From January until the end of June, vehicle sales in Ontario climbed by 1.9 percent y/y as employment in the province expanded by 2.2 percent in June, but buyers in British Columbia scaled back their pace of spending over the same period amid a slowdown in labour markets, with auto sales dipping by 2.5 percent.

Saskatchewan and Alberta, which showed strong numbers in 2017 due to commodity price recovery and vehicle recovery following the Fort McMurray wildfires, saw sales decline in the first half of 2018 by 10.3 and 3.2 percent y/y respectively.

So far in 2018, fleet sales have compensated for a decline in retail volumes in Canada, although it ultimately boils down to a single driver. Manitoba saw an anomalous surge of 225 percent y/y to date, with nearly all the gains concentrating on one automaker. Take Manitoba out of the equation and there’s a 3.2 percent drop in fleet sales across the country.

Despite the weaker market, the news still isn’t bad. We’re still expecting to see a second-best record for 2018, and we’re anticipating sales of 2.0 million from the record high of 2.04 million last year.