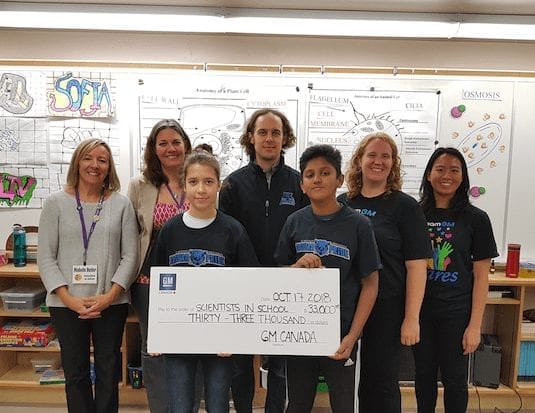 On October 17, General Motors of Canada announced a C$33,000 donation to help deliver workshops in six schools across the Niagara Region as part of the Scientists in Schools initiative.

From kindergarten to grade 8, this donation enables participating schools to incorporate a workshop that incorporates science, technology, engineering and math (STEM).

Through Scientists in School—an education-focused charity that aims to spark children’s interest in STEM—students will be able to take part in hands-on workshops in both the classroom and larger community.

Under the tutelage of a science expert, students can learn the skills necessary to become the scientists and engineers of tomorrow.

“GM Canada is committed to providing STEM education programs for students to inspire the next generation of technological innovators,” said Stephanie Thompson, General Motors St. Catharines engineer and STEM funding committee member for GM Canada. “Our goal is to expose students to STEM through education and mentorship programs, such as Scientists in School, to help increase their interest in pursuing technology and engineering degrees.”

Back in January 2018, General Motors of Canada announced a new STEM Fund, which included committing $1.8 million for supporting initiatives that focus on introducing elementary and high school students to STEM, with an emphasis on inspiring children to try science and technology through interactive, hands-on programs across the country.