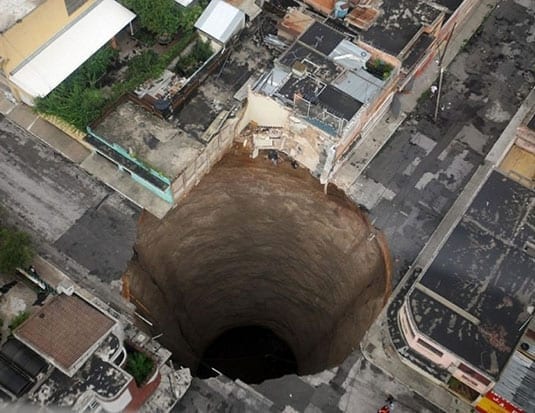 How solid a footing is your business on?

A few years ago, I remember hear-ing about a sinkhole that opened up in Guatemala City. One day everything looked okay. The next, a massive hole appeared, swallowing up an entire street.

If this were a one-of-a-kind occurrence, then it would have been an even bigger story. Unfortunately, sinkholes appear all over the world, and according to the experts, they’re caused by either natural changes in geography, or the disintegration of manmade infrastructure, such as sewage pipes, service tunnels, and the like. In the case of Guatemala City, it looks like the latter was to blame.

What I find fascinating about sink-holes is that you seldom know they’re about to form. All the trouble begins behind the scenes, deep underground, and then when you least expect it, the ground beneath your feet simply disappears.

The same can be said about some of the economic disruptors we’ve seen in our industry over the past few years. “Disruptor” is the polite term most people use. In fact, I think in most cases a more appropriate term would be “destroyer,” since a lot of these so-called disruptors have destroyed businesses, and in some cases, entire industries.

Like sinkholes, many of these destroyers begin behind the scenes, perhaps in a boardroom, or worse yet, a basement where a college student begins working on an app that in a few months will wipe out a bricks-and-mortar business or an entire industry. And like sinkholes, you never know it’s coming until the ground underneath your feet simply falls away.

So what’s lurking underground now? What ideas or apps are germinating? What’s going to make the earth underneath your feet disappear in a few months or years?

A good friend of mine, and a well-respected industry analyst, Dennis DesRosiers, recently addressed some of these disruptors in an article he wrote. He pointed to autonomous vehicles as one of the disruptors about to impact our industry in a big way, especially since “they are forecast to be available as early as 2020 and widely available by the middle of the next decade,” he wrote.

While we may think of autonomous vehicles as simply another product dealers will sell and service, DesRosiers explains that this is not the problem. The real issue is that technology giants like Apple and Google, emboldened by their over-flowing war chests, will be competing head-to-head with traditional dealers, as well as vehicle manufacturers, for a slice of the autonomous vehicle mar-ket. Could their well-funded efforts cause sinkholes in our industry?

DesRosiers didn’t mince words when he shared his view. “If you own a dealership with an existing OEM and they aren’t able to compete with these new players, then you are very vulnerable,” he said. To be perfectly transparent, he did add, “it could be a long time before any negative impact is felt at the dealer level.”

Another one of the many disruptors facing our industry is ride-sharing. Simply put, if this trend continues to grow, it would seem that vehicle ownership would decline. Why own a personal vehicle, when you can share someone else’s?

We see this way of thinking materialize in companies like Uber and Lyft. We’re also seeing it with manufacturer-backed ride-sharing services like Maven (GM) and car2go (Daimler), for example.

The whole idea is based on a simple premise—instead of leaving a vehicle parked idle when not in use, why not share it for profit? Or in the case of some of the services mentioned above, why not share a pool of vehicles with lots of people? Simply use the vehicle when you need it, pay for it, and then walk away.

How does this way of thinking impact vehicle ownership? And how does that change the way vehicles will be serviced in the future? If you’re only borrowing a vehicle for a few hours, you’re certainly not bringing it in for an oil change.

The fate of the dealer

So where do all these disruptors leave the traditional dealership model? The fact is, we don’t know. We see the trends, we can make educated guesses, but in the end, only time will tell.

There are those dealers and dealer-ships groups that will adapt to change, and continue to thrive, regardless of how many sinkholes appear at their feet. But there are those who simply won’t be able to adapt fast enough, or won’t know how to adapt. These are the ones that are in real danger of succumbing to the next great industry sinkhole, and they’re the ones who would be wise to consider alternatives now, while they and their businesses are still on solid ground.