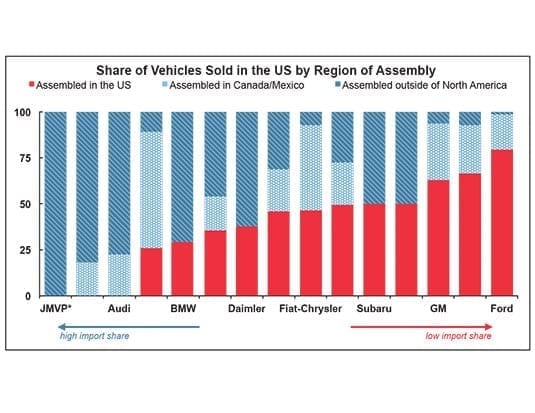 The U.S. talks tariffs, but we don’t think that will happen.

Auto sales in Canada dipped into negative numbers for the fourth consecutive month in June, and we expect they’ll still decline slightly for the rest of the year, but even so, the news is promising. We’re still on target to top two million vehicles, slightly below the record year of 2.04 million sold in 2017, and which will still be the second-best year ever. Of particular interest is the continued growth in luxury vehicles, up 5.2 percent over the first half of 2018.

Global auto sales expanded by 4.6 percent y/y in May, and that brought the year-to-date total growth rate to 3.4 percent over the same period in 2017. That growth comes primarily from strong gains in developing economies, but a number of advanced economies, including Canada and the United States, have reached sales plateaux.

Even so, both countries are still very near their record levels. Canada showed a year-on-year decline of 1.7 percent in June, while the U.S. had a 4.7 percent y/y expansion in June but slightly lower sales volumes over six months compared to 2017. We expect the U.S. to finish the year with 17 million units, down from a record high of 17.5 million set in 2016. Rising interest rates and higher gasoline prices will be to blame for scaled-back discretionary spending in the rest of 2018 and 2019.

In Central Canada, a slight increase was offset by declines in Western and Atlantic Canada so far this year. In the first five months of 2018, sales fell 7.7 percent y/y in the Atlantic Provinces. Purchases in Western Canada are down 1.1 percent y/y after four consecutive months of year-on-year declines as sales volumes “retrace their steps” from the sharp uptick when buyers replaced vehicles destroyed in the wildfires.

Alongside Canada and the U.S., Mexico saw depressed sales in the political uncertainty leading up to the presidential election, and in May, sales were down 8.8 percent y/y. They’re expected to bounce back in the second half of the year, which would result in an annual decline of around 2 percent y/y across all of 2018.

A fall and then a rise

Political uncertainty also surrounds the 6.8 percent drop in the United Kingdom as the impending Brexit decision dampens economic growth, enough to drag down the growth rate of Western Europe in the first five months of 2018. The rest of the region experienced a 3.2 percent rise and is expected to improve, while the UK’s economy is expected to start growing again and help with volumes across Western Europe.

The big news in North America is import and export, with the U.S. Administration threatening to impose tariffs of up to 25 percent on motor vehicles and parts crossing the border. We don’t think this will actually happen, because it’s such a big move across such a huge industry. Such tariffs on Canada, Europe, Japan and Korea would result in retaliation and the escalation of a huge global trade war that would be catastrophic for the United States’ economy, pushing it into a recession by 2020 and right before the next U.S. presidential elections.

America is a net importer of automobiles: in 2017 it imported 8.3 million units, but exported only two million vehicles. Canada and Mexico account for roughly one-quarter of all vehicles sold in the U.S. each year. The European Union sends 7 percent of all vehicles sold in the United States, while Japan and Korea combined account for about 15 percent.

Tariffs would cause losers, not winners

If the U.S. imposes tariffs on all other countries but retains duty-free trade within NAFTA, the automakers that would lose the most are Mazda (82 percent of its U.S. sales volumes are imported from outside North America), Audi (77 percent), BMW (71 percent) and Daimler (62 percent). Of all non-U.S. automakers, Honda would suffer the least, since 93 percent of its U.S. sales are vehicles assembled in North America.

Should the U.S. place tariffs on Canadian- and Mexican-built vehicles alongside those from other countries, the Detroit Three would be seriously hurt. Because of their NAFTA-located assembly plants outside the U.S. borders, Fiat-Chrysler would owe tariffs on 54 percent of all vehicles it sells in America; General Motors would be hit on 37 percent; and Ford would see tariffs on one-fifth of its sales.

As well, the vehicle assembly industry in the United States is operating at close to its full capacity, implying that if tariffs were brought in for protectionism, American auto production would likely only increase marginally in response. The economic downturn in such a scenario would prevent companies from investing in their facilities to increase production, and sales would decrease amid rising prices for imported vehicles and depressed household expenditures.

For all of these reasons, we believe that the United States will maintain the status quo: there’s simply too much at stake, and too much to potentially lose. About 45 percent of all vehicles sold in Canada come from U.S. facilities, and that’s part of a major market we don’t think anyone will jeopardize.