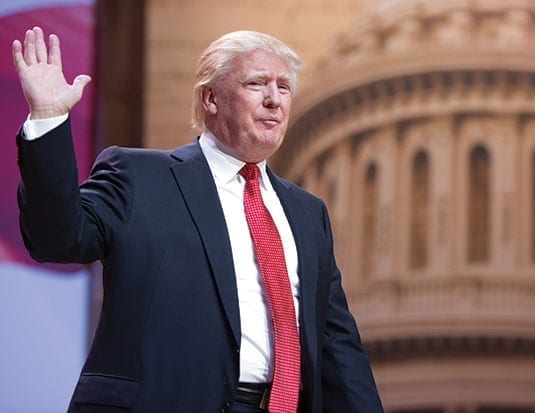 The uncertainty Trump’s tariffs are introducing to the market is difficult to overstate.

What a difference a year, or even a few months, make. It wasn’t that long ago when the word “disruptor” brought to mind images of technology, the Internet and of course, the millennial generation. But today, perhaps one of the biggest disruptors to the economy in general, and to the auto sector in particular, is the President of the United States himself.

A few months ago, it seemed like the biggest concern we had was NAFTA, and how it would be renegotiated. Today, Trump is talking tariffs, and he’s not being gentle. Because he’s citing “national security” to justify the tariffs, he’s talking hefty double-digit figures in the neighbourhood of 25 percent. That’s a serious tariff that can do serious damage to the auto sector here in Canada.

Speaking to a Parliamentary Committee on International Trade about the impact of tariffs on Canadian businesses, companies and workers, the President & CEO of the Canadian Automobile Dealers Association (CADA), John White, made the following eye-opening observations:

“In our opinion, there is no greater threat to the health of the Canadian economy than the looming trade uncertainty between Canada and the United States. And more specifically a 25 percent automotive tariff as threatened by the U.S. President.”

White further explained just how overwhelming these tariffs would be to the Canadian economy, using words like “tsunami” to describe the impact. “Steel tariffs and retaliation measures, while significant and negative for the retail automotive market are a minimum compared to the tsunami-like economic downturn that will occur should we be subjected to a 25 percent tariff or even to lose NAFTA,” he argued.

In my opinion, now is the time for dealers to start asking themselves some hard questions. Am I prepared for an economic “tsunami”? Would my dealership be able to weather such a storm? Are my pockets deep enough to carry me through a crisis of these proportions?

White compared the impact of Trump’s tariffs with the economic slowdown we saw just a decade ago—a slowdown that had a huge impact on the auto industry, and saw many businesses destroyed.

“During the 2008-2009 global financial crisis, the Canadian automobile market decreased to a level of 1.4 million cars,” White said. “In our view, the 2008-2009 economic situation would pale in comparison to what our members and the Canadian economy would face if we end up with a 25 percent tariff.”

White next cited a TD Bank report that is forecasting job losses in the neighbourhood of 160,000 net positions here in Canada, with dealers in general having to let go between 25,000 and 30,000 people, should the threatened tariffs materialize.

This kind of economic “tsunami” would have a grave impact on Canada in general, and on the auto sector in particular. The unemployed, as well as those who fear the possibility of unemployment, aren’t likely to be shopping for new cars.

Those who will be in the market for a new car, will be less likely to purchase one if the prices go up, and many industry experts expect that to be the case if the trade war were to escalate.

Prepare for the worst, hope for the best

Storms like these aren’t impossible to weather, and even take advantage of, if you’re part of a dealer group with deeper pockets, or if you own a few stores and have ample resources to tap into. What I’m most worried about is the single point store or small operator who won’t be able to survive what could potentially be the proverbial “perfect storm.”

These are the small businesses that need to think about getting out now, while their future isn’t cast in stone. Wait too long and your battered business will be less appealing to potential buyers, who will be more likely to look at you as a distress sale, rather than as a valuable asset.

Granted, like many forecast storms, this one could never materialize, regardless of how dark the clouds may seem on the horizon. And indeed, it would defy logic for Trump to raise these kinds of tariffs, despite the warnings from all experts that doing so would be detrimental to the economies on both sides of the border. But one thing we’ve learned with Trump is that logic doesn’t always dictate his actions. What seems unlikely, often times comes to fruition, with this President.

So every dealer must ask him or herself, “Do I have what it takes to see my way through, regardless of what may come my way economically? Or is this the time to get top dollar for my store and call it a day?”

That’s a question only you can answer.