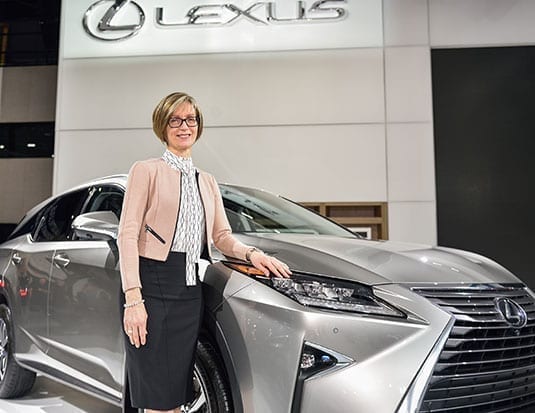 An exclusive interview with the Director of Lexus in Canada about the company’s focus on customer service.

Jennifer Barron is in it for the long run. For the last 29 years she has been with Lexus and Toyota Canada, and in 2016 she took it to a new level, becoming the Director of Lexus in Canada.

She is the first woman to hold the position, and reports to a fellow Canadian, Larry Hutchinson, the President and CEO of Toyota Canada in Toronto. The organization includes 39 Lexus dealers across Canada, and has now racked up five consecutive years of record sales.

“There were two things in my moving up,” Barron says. “One is hard work. The other is that Toyota has a philosophy of moving people around so they get a rounded experience. That was one of the things that kept me here for so long, because it presented me with opportunities and I got to learn new skills.”

Earlier this year, Barron attended the Geneva Motor Show for the unveiling of the all-new Lexus UX, the brand’s first compact utility vehicle. “We have the innovative design, and you can see how Lexus has really changed since the 2012 introduction of the GS,” she says. “You can see that in all the new products we’re bringing to market.

“It’s changing how people see Lexus and bringing younger people to the brand. The vehicles might have been closer to Toyota years ago, but it’s now a luxury brand with its own design and engineering. We don’t cross-pollinate the brands.”

Barron is fully bilingual and studied office administration at Ryerson Polytechnical Institute in Toronto. After she graduated, she did some short stints in banking and digital equipment. She joined Toyota in 1989, a year before Lexus was launched.

The top position came “out of the blue,” Barron says. “I hadn’t seen it in my vision of ‘next steps,’ and I was incredulous. When my boss told me, I had to ask him to repeat it.”

Growing as a brand

A typical day involves decisions about strategy and the direction that Lexus is taking. “We get the management team together and we talk about our longer-term goals,” she says. “A lot of that is collaborating within Toyota Canada to keep Lexus on track in terms of what we want to achieve. We want to continue to grow it as a luxury lifestyle brand in Canada, and reach more customers. I want profitability with increased sales, but without ever jeopardizing customer satisfaction. I want to maintain that excellence around design and the guest experience.

“It’s all about treating that person as you would a guest in your home. How you interact when you’re on the phone with them, meeting someone at a car show, anticipating their needs and going beyond. That’s why we call them ‘guests.’ Luxury customers are very discerning and have high expectations of what they’ll experience, and it’s a bigger challenge being on the luxury side of the business.”

Most people in the company’s higher positions came from sales or accounting, but Barron worked her way up through the customer side of the business. “I put a lot of emphasis on dealers to work on the guest experience, and on the team to work on dealer relationships,” she says.

“I have a very strong focus on collaboration with our dealers. A lot of time and effort goes into maintaining and building those relationships. We draw dealers in when we’re contemplating programs to get their perspective, and we’re really listening. We can’t design [programs] in a bubble, because we don’t have the experience that the dealers do.”

The company maintains a field structure of teams that visit dealerships each month to communicate with them. Some of today’s Lexus dealers were existing Toyota dealers when the luxury brand launched.

In addition to one-day training, dealer personnel can also go to the three-day Lexus Experience. “It’s open to anybody at every dealership,” Barron says. “Anyone who’s interacting with the customer, even those who just touch a car, should understand what Lexus is all about, everything it stands for, and how to treat a guest. Even when we do product training, the customer focus is woven into it.”

The brand had record growth of 10 percent last year. “That’s a great accomplishment. I like to think I had a little bit of a hand in it, but it’s not just me. We had accolades from J.D. Power three years running for service CSI, and that’s not only across all the OEMs, but also Costco, Walmart, Jiffy Lubes, all of the service facilities. Number one three years running as measured by our customers. That’s something that doesn’t happen without a lot of effort on the part of all the dealers and our staff, and our team and commitment.

“We have a small number of dealers and they’re passionate. We’ve got a cohesive team, and great support through management and the executive. It’s an exciting time to be in Lexus.”