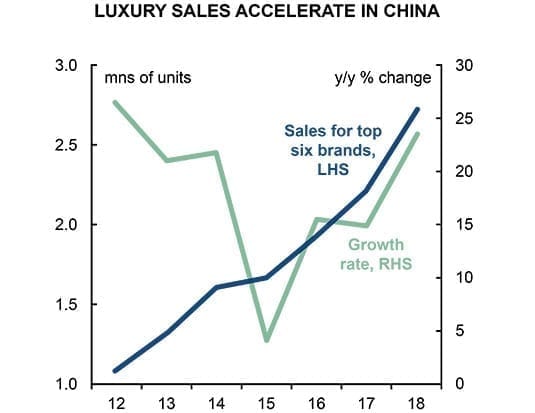 Dealers tend to view sales locally, but to get a true picture of how the auto industry is doing overall, we look globally. And on that scale, the picture looks good.

Global auto sales increased 1.2 percent y/y in March, our most recent data. A temporary decline across Western Europe was buoyed up by stronger volumes in the United States, ongoing gains in most emerging markets, and solid sales in China.

We’re focusing on those sales in China. During March of this year, we saw sales rise 5.1 percent y/y, stronger than the three percent increase reported during the previous two months. That’s even more newsworthy when you realize January marked the end of tax incentives on fuel-efficient vehicles. Back in 2015, the Chinese government cut the tax on these in half, from 10 to five percent. It was in place until the end of 2016 and gradually phased out, first rising to 7.5 percent, and then completely removed and back to the 10 percent tax at the beginning of this year. There was some debate as to how much that might dampen sales this year, but now that sales are rising, it highlights that the market continues to be strong.

In fact, the strongest segment in China’s market is luxury vehicles, with the top six luxury manufacturers accelerating their sales by about 25 percent—an enormous gain—in y/y growth through the end of March. Last year, luxury sales were up about five percent for the major automakers as a whole and, based on the data they’ve reported so far this year, we’re looking at about seven percent worldwide.

It’s difficult to get reliable economic data from China; we have reports of GDP growth, but there is no good data to back the numbers. However, we can track the global sales reported by the automakers, and the strong sales in China indicate to us that the country’s economic activity is fairly resilient.

The importance of this is that China is now the second-largest economy in the world behind the United States, and its auto market is the largest. When we get confirmation that activity is improving in China, it provides confidence that the global economic numbers are continuing to improve.

We have also seen two auto-industry announcements from the Chinese government that are important in terms of the trade tensions that are going on with the United States. The first is that China plans to ease restrictions so that foreign automakers will be allowed to own more than 50 percent of the businesses that they operate in China. Right now, they can only own less than half.

This was initiated as a way of helping the Chinese automakers to get established, get new technology, and build their own brands. When the rule was created in the 1990s, China accounted for less than one percent of global auto sales. It now commands nearly 30 percent of the global auto market, and so there is a push by the U.S. and other countries for them to ease off on these restrictions. China has now said it is willing to do so, beginning in 2022 for the auto industry in general, and with a specific focus on electric vehicles that could come into effect this year. We will see where negotiations on this with the U.S. lead in the next little while.

The second is that China announced it will look at reducing the tariffs on imported vehicles, which currently stand at about 25 percent. News reports suggest this could happen soon, but even if it takes longer, it still means the government is willing to look at the issue. About 95 percent of all vehicles sold in China are made there, and the U.S. Administration would like the Chinese to buy more cars built in America.

Strength on this side of the ocean

Beyond China on the global market, we have seen the U.S. numbers improve from where they have been. Everyone came into the year expecting American sales to decline somewhat, and there was speculation that 2018’s total sales could fall below 17 million vehicles for the year. But sales have strengthened and have been above that level so far, by about 300,000 units more than expected, which is always good news.

Our Canadian numbers fell a little bit in April, but if you look at the numbers for the first four months of the year, we’re still at a record-setting pace. Last year Canadians bought 2.04 million vehicles and, so far, the annualized sales pace through April puts this year closer to 2.06 million. Even if sales soften, we still expect to see 2018 go out at about two million vehicles, which will be our second-best year ever if it does.

As with China, luxury is doing well at home. Last year we saw luxury vehicles rise by about 12 percent, and while there has been moderation, it’s still about five percent. The Canadian economy may have slowed a bit since last year, but overall, we’re continuing to do well.