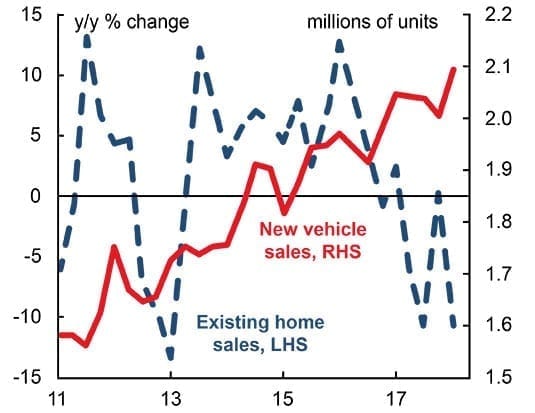 Around the globe, most markets are doing well.

Despite a slight dip in Canadian sales in March, we’re still in very good shape, and much of the global economy feels the same way. Global sales rose by three percent year-over-year in the first two months of 2018, and that’s an increase over the 2.8 percent gain we saw during all of 2017.

Some of the emerging markets were particularly strong, and posted double-digit gains that reflected the strongest global economic growth since early 2014. Eastern Europe surged by 19 percent y/y, while South America jumped by 16 percent.

The United States is one of the few countries where sales have declined this year, but don’t believe this will continue. Conditions are improving for both households and businesses, and March sales were still better than expected.

Our view is that American households are seeing their income gains accelerate, and people are going out and getting into auto loans. On top of that, the quality of these loans is improving. They’re increasingly in the upper credit scores, with more moving into prime and super-prime, while the share of subprime loans decline significantly.

The concern over the last few years was an increase in delinquencies, which many people thought was indicative of future problems. Instead, we’re seeing that trend reverse. Both 30- and 60-day delinquencies declined about three percent y/y in late 2017, the largest improvement we’ve seen in several years.

Interest rates are increasing, and yes, that is going to make it more difficult for people to buy a vehicle. However, because income growth is accelerating, the share of household income going toward the auto payment is at one of the lowest levels ever, and it’s not going to have the impact that people fear it will. US households account for 85 percent of all new-vehicle sales, and we’re looking at the lowest unemployment rate since the tech boom of nearly 20 years ago.

On the business side, some of the lower volumes we saw in the U.S. last year were due to a 12 percent reduction in purchases by rental companies, which buy a little over nine percent of all vehicles sold in that country. Some of that is due to ride-hailing companies nibbling away at drive-it-yourself rentals, and also a drop in tourist activity in America last year.

Rental companies are still reducing their volume but it has stabilized, and rental industry purchasing is now down about three percent. We’re seeing that offset by businesses that are increasingly renewing their aging fleets. In the first two months in 2018, the increase in fleet purchases was about 12 percent y/y, which is increasingly overwhelming the ongoing reduction in rental activity.

Overall, if you take out the rental fleet factor, sales of new vehicles in the US were largely flat in 2017, and strengthening household and business fundamentals point to some improvement from the current levels in the coming months.

In Canada, despite the small dip in March, we’re still continuing to see sales gains, rising by 5.7 percent y/y in January and 2.0 percent in February. Overall, sales in the first quarter of 2018 are up from what they were during the first three months of 2017.

The gains in Canada have been broad-based, and Ontario’s sales are moving ahead about five percent y/y, and that’s important because when you look at the headlines about the province, and Toronto in particular, we hear bad news about weakening house prices. The weakness is there, and existing home sales have plunged 27 percent below what they were a year earlier in Ontario. That has reduced overall volumes in Canada by 11 percent y/y, and pulls the average Canadian home price below that of a year earlier for the first time in nearly a decade.

However, because we’re seeing the auto market continuing to improve in the province, we think the slowdown in housing is not an accurate reflection of economic activity overall. Given the ongoing strength in most economic indicators, outside of existing home sales, we believe the auto market provides a more accurate assessment of overall economic conditions across Canada.

In fact, housing and automobiles have tracked well together, with only temporary sharp divergences. You have periodic episodes where you have a sharp decline in housing, but as long as the auto market continues to hold, it indicates ongoing economic strength, and we think that’s where we are at the moment. Last year we thought Ontario would lead the decline, but now it looks like the market is very healthy.

Across the country, we saw a record 2.04 million vehicles in 2017. That was the best sales year ever in Canada, but even so, right now we’re actually above last year’s pace. If it continues, we could possibly finish out the year at 2.1 million sales. We haven’t reduced our forecast, and we still expect the numbers to nudge slightly downward as the year progresses, but if we don’t actually set a new record at the end of December, we should see our second-best year nevertheless.