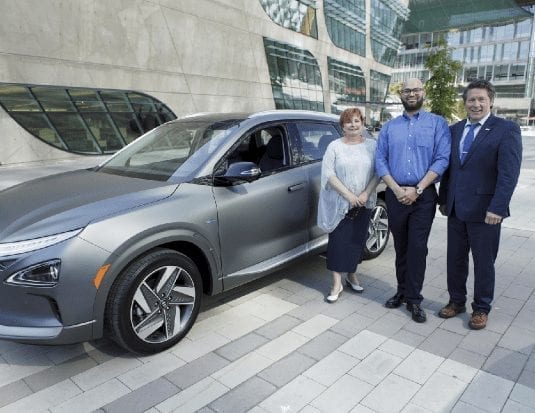 The ride-and-drive offered elected officials the chance to drive the NEXO and to witness the benefits of using fuel cell technology in vehicles. They were also educated on how using this technology in automobiles can help contribute to a cleaner environment.

Fuel cell vehicles don’t require gasoline, but instead run on advanced fuel cell technology that uses Hydrogen. When Hydrogen and Oxygen are combined from the atmosphere into the fuel cell stack, electricity is produced via an electrochemical reaction. The only by-products of this process are water vapour and power, resulting in vehicles that yield zero-emissions.

“Hyundai is the first automotive manufacturer to bring two generations of fuel cell vehicles to the Canadian market—first with the Tucson fuel cell, and now the all-new NEXO,” said Don Romano, President and CEO of Hyundai Auto Canada.

“The launch of NEXO reinforces Hyundai Motor Group’s plan to bring 18 eco-friendly vehicles to global markets by 2025 to help pave the way for a greener future.”

NEXO is the latest technological flagship to enter Hyundai’s expanding line-up of eco-vehicles and can be refueled with Hydrogen in as little as five minutes, with an estimated range of more than 600 km on a single charge. In addition to NEXO and the Tucson fuel cell, Hyundai’s eco-range also includes the IONIQ, a vehicle that’s powered by one of three different electrified powertrain options in a single model (hybrid, electric and electric plus).