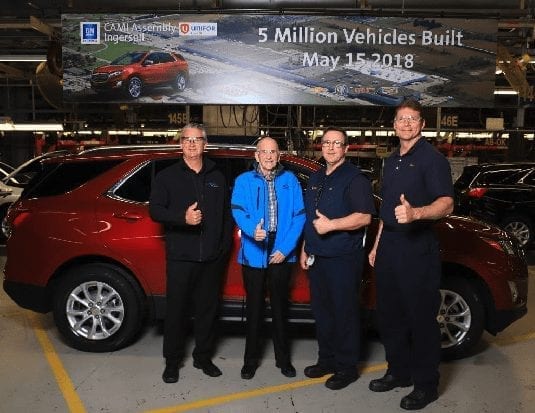 On May 15, CAMI Assembly employees had five million reasons to celebrate as they marked the production of their five millionth vehicle, a 2018 Chevrolet Equinox at the Ingersoll, Ont. assembly plant.

Employees celebrated across all three-shifts as the landmark vehicle made its way through the plant.

CAMI employees will be given the opportunity to purchase the Cajun Red 2018 Chevrolet Equinox LT AWD through the local dealership, Searles Motor Products.

The plant was originally established as CAMI Automotive Inc. back in 1989 as a joint venture with Suzuki Motor Corporation. During the early production years, CAMI produced models for both Chevrolet and Suzuki. In 2011, the joint-venture partnership with Suzuki Motor Corporation came to an end and the plant became a fully-owned entity of General Motors, which is now known as CAMI Assembly. As a result of a C$800 million investment, CAMI Assembly has been producing the current-generation Chevrolet Equinox since January 2017.

The employees at CAMI have created a culture of team involvement and continuous improvement resulting in numerous industry awards for vehicle quality and productivity. In 2014, CAMI was awarded the prestigious J.D. Power Silver Plant Award for the Americas, recognizing the plant for its long-standing commitment to customers through leadership in initial quality.

The team at CAMI Assembly together with Unifor Local 88 have also been supporters of the local community through donations and outreach to organizations such as the United Way, Alexandra Hospital, Fusion Youth Centre and the Upper Thames River Conservation Authority.

In August, CAMI Assembly will open its doors to the local community as it hosts an open house to celebrate its upcoming 30th anniversary.