New LEAF more of a pleaser 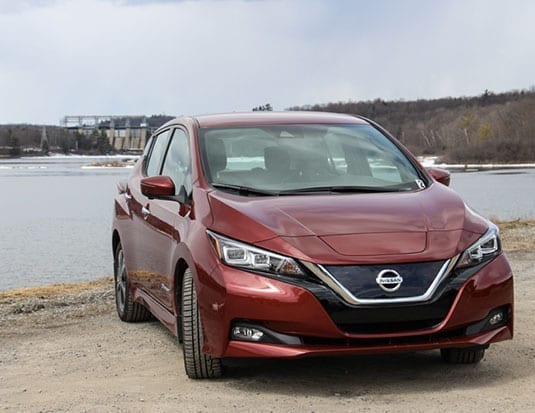 Not only is the 2018 LEAF more dynamic, but it’s also more technologically sophisticated and boasts better autonomy as Nissan demonstrated to the Canadian media in Ottawa on April 9 & 10 and 12 & 13.

“We spoke with consumers throughout the various stages of the improvement process,” states Owen Thunes, Manager of Zero Emission Research/Technology Planning at Nissan. “They told us that they wanted greater autonomy as well as added performance.”

So the 2018 LEAF offers 37% more horsepower and 26% more torque. And while the batteries take up the same amount of space, their storage capacity has been increased by 33%, thereby increasing autonomy from 172 km to 241 km. This was made possible by altering the chemistry of the batteries and increasing the processor speed of the computer driving the power inverter, all of which has allowed for a better power conversion rate.

Style-wise, Nissan has strived to liken the LEAF’s new design to that of more traditional cars. Gone are the quirky angles and lines often sported by electric or hybrid vehicles—and it now displays a more aggressive design in line with the brand’s visual identity.

Blue trim scattered throughout the interior emphasizes its identity as a Nissan EV and the car proudly displays a “zero emission” badge along the bottom edge of its front and rear doors, as if to thumb its nose at the fossil-fuel vehicles that it crosses on its path.

The LEAF wishes to position itself as affordable and versatile within its niche — where it is competing alongside the Volkswagen e-Golf, Ford Focus EV, Hyundai Ioniq, Chevrolet Bolt and Tesla Model 3. There are 6121 LEAF drivers in the country to date and Nissan has sold 310,000 units worldwide.