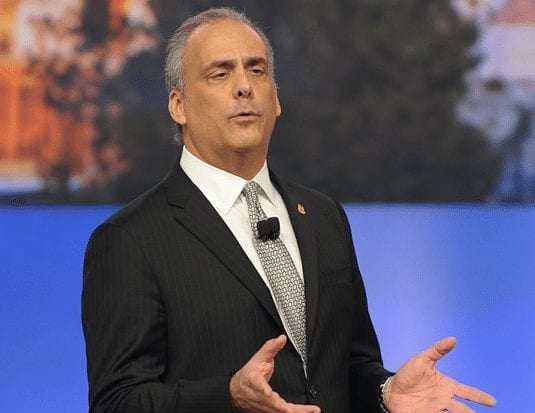 In his final remarks as 2017 Chairman of the National Automobile Dealers Association (NADA) in the U.S., Mark Scarpelli saluted the nation’s new-car dealers for their successful advocacy efforts on Capitol Hill fighting to preserve vehicle affordability for car buyers.

Affordability of new vehicles is becoming an increasing problem not only in the U.S., but also Canada and other countries.

“Vehicle affordability is the air we breathe. Affordability is everything. People need cars —affordable cars—more than ever,” Scarpelli said during remarks at NADA Show 2018 in Las Vegas last week. “If there’s one group that got that message loud and clear, it was the Consumer Financial Protection Bureau.”

In 2013, the CFPB issued an auto lending guidance that threatened to eliminate a dealer’s flexibility to offer consumers discounted rates on auto loans.

“We knew something that everyone else failed to see: Consumers won’t be buying cars tomorrow if they can’t afford them today,” Scarpelli said. “That’s why NADA fought for consumer affordability at every turn and throughout the year.”

“This legislation would have created a consumer trade-in tax for every recalled car on the road—even the ones with only minor defects like a peeling sticker,” he added. “We averted legislation that could have cost consumers on average $1,200.”

One of NADA’s biggest challenges was tax reform in the U.S., which again mobilized NADA’s grassroots efforts, Scarpelli said.

The bill, which was signed into law in December 2017, preserved the 100-percent deductibility on floor plan loans available to dealers south of the border, increased the estate tax exemption, and preserved both the LIFO accounting method and advertising deductibility.

“The stakes for our businesses are enormous: When taxes increase, jobs at dealerships decrease; Our capital investments decrease; And prices for consumers increase,” Scarpelli added. “If we had not preserved floor plan deductibility, a lot of dealerships would be paying more in taxes for years to come. Many would hope to simply break even. Many more would suffer crippling losses. Because the original tax bill slashed interest deductibility by 30 percent.”

On the industry affairs front, Scarpelli, over his term as chairman, said he made it his personal mission to level with automakers concerning the “elephant in the room, also known as stair-step incentive programs.”

“Make no mistake, dealers are proud to work with our manufacturers. We value our brands and our integrity above all else. So, if any factory program runs counter to that we shouldn’t use it,” Scarpelli said. “Dealers and automakers can have the same goal. We just need to go about it in the right way. Let’s sell our inventory in large volumes. Let’s do it at competitive prices. Let’s put a great customer experience first because if we do that the numbers will fall into place.”