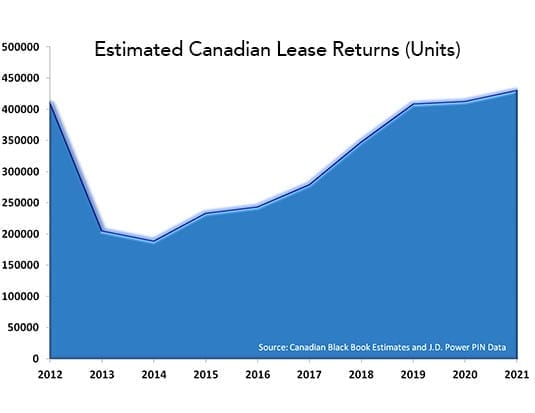 A few weeks ago I had the distinct pleasure of addressing the 6th annual TalkAUTO Canada conference, in Toronto. In my presentation I provided an overview of what we at Canadian Black Book see as the central storylines in the 2017 Canadian auto market, as this record shattering year begins to wind down.

From a general economic standpoint, there is a lot of good news. However, to balance all that positive news there are suggestions that we are at the top of the business cycle and some leaner recessionary times may be ahead. Especially when we look at rising levels of Canadian consumer debt, and overcooked housing prices in some cities, there is cause for concern.

In this month’s column I’d like to share some of the highlights from my presentation. Here are the key topics of interest, as we survey the automotive landscape here in Canada.

According to Statistics Canada data, used car sales are up 9.5 percent so far this year. The used car folks are doing (on a percentage basis) an even better job of moving the metal than the new car folks. Well done!

It has been a record year, and it looks like two million units is almost a sure thing, for the first time ever. As of October, sales were up 5.6 percent. If the industry only performs in a very average way for the rest of the year, we will miss the big milestone by less than 300 cars. I don’t see the tempo being average, so I will stick my neck out a bit and say we will hit the two million mark, no problem at all! Another job well done!

Last month, I wrote that the “car” as a segment is dying and doing so in quite a fast fashion. The market in Canada is now more than 66 percent SUVs and trucks, a drop of over five percent in just the last two years alone. At this rate, we could be in the area of 80 percent SUVs and trucks and less than 20 percent cars in no time at all! If you own a sedan or coupe it might be a collector’s item, as manufacturers will be less likely to replace those models in their line-ups at the end of their lives.

Used car prices are quite critical, not only in obvious ways, but they also greatly influence residual values of new cars for leasing. It is helpful to recall that generally when used car market values go down, this drives the price of leasing a new car up. This is why wholesale values are so important in residual value forecasting.

That being said, we see used vehicle pricing at a turning point here in Canada. We’ve had a great run of values increasing for almost seven years now. In 2017 we have seen values level off and even begin to decline. They have declined more on the truck side, about two percent, than on the car side, yet we expect this is a turning point for all values domestically.

It’s a win for the used car consumer, and the dealer trying to source product, but a loss for the consumer trying to lease a car, as leases will become more expensive. Prices in the U.S. are already headed in a downward direction.

Consumer leasing has been growing steadily in Canada since the end of the economic crisis back in 2008. It has doubled from around 13 percent at the end of 2010 to 26 percent today, according to data from J.D. Power’s Power Information Network.

This leasing growth manufactures more used cars down the road, in the form of lease returns. Between 2013 and now it was pretty normal to expect a little over 200,000 cars to come off lease here in Canada each year. But from 2019 through 2021, between the growth in sales overall and the growth in leasing, we will be getting back around 400,000 vehicles per year.

This will put significant downward pressure on prices, particularly if a given brand is not managing its remarketing programs very closely. At the same time, the U.S. market has a similar (yet 10 times larger!) issue with two million more vehicles coming back off lease, in the same time period. This will drive down prices on both sides of the border and reduce interest in importing used vehicles from Canada.

The Canadian dollar has been doing all sorts of interesting things lately. There was a two year high in September of this year, a difference of $0.14 in 20 months! A stronger Canadian dollar makes Canadian used vehicles less attractive to U.S. buyers, thus putting downward pressure on prices here at home. The dollar has weakened since September but remains one of the critical variables in our market for used vehicles.

Concerned about the boom

The boom, both now and in the future, of supply of used cars is a big concern. There is a lot of “product” on both sides of the border, and more are coming. This will result in lower prices.

Wholesale values are starting to show weakness, with trucks and SUVs just starting to weaken here. The U.S. is ahead of Canada in this trend. The Canadian used market has been kept stable by exports, which are linked to the fragile whims of the exchange rate.

2017 has been a great year so far, so enjoy and celebrate the success. We see values cooling off in 2018 and remarketing of off lease vehicles being more critical than ever before!