The Chinese Are Coming 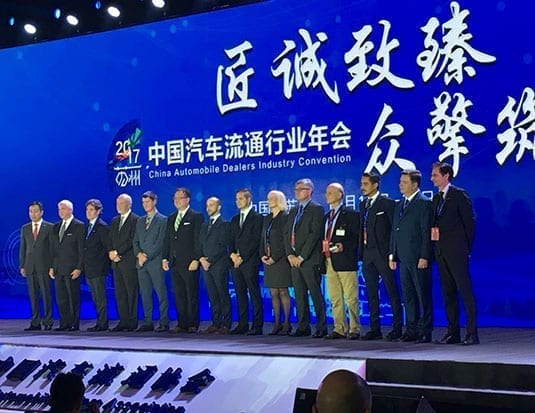 Now is the time to start building the relationships that dealers will benefit from in the next five to ten years.

I recently had the opportunity and privilege to represent the TADA in China during a conference hosted by the Chinese Auto Dealers Association. This is a government run association for all the new car dealers in China, and their annual conference includes a trade show, a general convention, breakout sessions, and an international component. The TADA, along with the CADA and the NCDA, were all invited to take part in the international component.

In addition to Canada, representatives from many other nations were in attendance, all of us eager to get to know the Chinese way of doing business, and to introduce our Chinese colleagues to the way the auto industry operates in each individual country.

To that end, we had the opportunity to hear from representatives from the European Union (EU), which was represented as an umbrella organization, along with France, Belgium, Italy, Germany, Russia, the United States, and others.

One of the major lessons learned had to do with the market penetration for electric vehicles abroad. In Canada, it’s about one percent, and if you think other countries are doing better, you’re not alone. It seems many of us think places like the EU and China are doing much better on a percentage basis, simply because electric vehicles have been in their markets longer than in Canada. But in reality, in the EU the market penetration is 1.1 percent and in China it’s one percent. So the fact that they’ve been doing it longer doesn’t mean they’re doing better.

Does that mean there’s no future for EVs? Not at all. But it’s clear that the issues and questions we face here in Canada are also of concern around the globe, namely the need for infrastructure and for better consumer education. Without these fundamentals, it’s difficult to pass that one percent mark.

We also learned that the questions we need answers to in Canada are questions other nations are asking themselves as well. For example, Tesla is now coming into its eighth year, which is a point in the lifespan of their vehicles when the batteries are going to start to come to a head. The question is, where do the batteries go when they begin to fail? And who is going to be able to afford the replacement cost for those batteries, which can be as high as $40,000? Moreover, what will happen to the vehicles whose owners can’t afford to replace the batteries?

On the right track

In Canada, we’re on the right track, from an education perspective, and in terms of the incentives we’re putting in place for EVs. We’re asking the right questions of utilities and governments as we look for ways to improve infrastructure. More importantly, our performance in the EV segment is on par with the international community.

Having said that, if a government were to mandate a three percent quota for EVs here in Canada, how would dealers be able to meet it? If countries that have been in the EV market much longer than us are having difficulty surpassing the one percent mark, how are Canadian dealers expected to succeed?

The retail community has a desire to provide a product that helps meet the green needs of the future, but infrastructure is still a challenge, as is market supply from the OEMs. Most importantly, the demand is not there. What we’re seeing in our marketplace now is healthy and on par with the international community.

We also learned that some manufacturers in the EU are starting to consider variations of a direct model, without a whole lot of answers as to how that will affect the current supply chain and the current service model. As an association, we’re keeping a close eye on how this matter unfolds.

In the meantime, we need to realize that China is a true economic powerhouse. Whichever market they go into, they don’t dabble. They become a legitimate alternative. The key for us, from an automotive perspective, is to build relationships with key industry people in China so that they adopt our current retail distribution formula vs. coming up with a distribution model that may be more direct, or may be perceived to be more beneficial to them.

That’s the reason we need to start building relationships now. The Chinese operate on a business perspective at an extremely high ratio of social engagement, interaction and trust. Until they have a comfort level with you, that discussion about market and business models will not be heard to the same degree.

We’re still in a “dating” phase with China, as far as selling Chinese cars in Canada is concerned. You won’t see much happening in the next 12 months, but in the next five to 10 years, this could be a great opportunity for those looking for future expansion of brands. It’s no different than 20 years ago when certain dealers were looking to expand with brands from Japan or Korea.

The Chinese are coming to North America. The question is when and how can Canadian dealers benefit? That’s why we need to start now to build the relationships that will benefit us in the future.