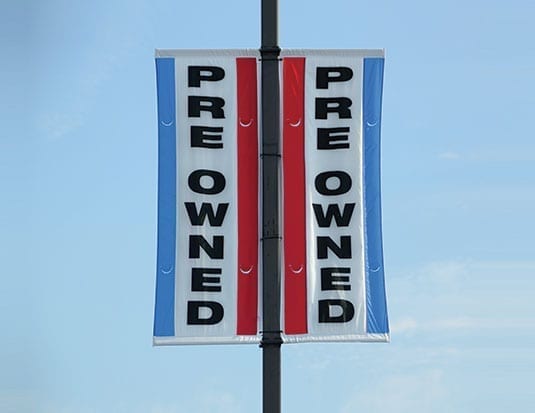 There are some tried and true methods of boosting used car sales—stay on top of and refresh your clean, well maintained inventory; keep prices competitive; and promote, promote, promote. But if you’re really committed to growing your used car operations, you may have to think further outside the box.

Keep your store top of mind: When a buyer is looking for a new car, they have endless options. Whether price, brand or image is a deciding factor, they can order whatever they want, right down to the paint colour.

Used cars are a different animal, of course. They may have a model in mind, which means advertising your inventory is still an important component of successful marketing. But on the other hand, they may suddenly find themselves in urgent need of a second or replacement vehicle. In those cases, you want them to think of you first. That means directing at least some of your marketing efforts towards being top of mind.

The Internet provides the ideal vehicle (no pun intended) for getting the word out about how terrific your used car department is. Rather than hammering on inventory, use Facebook, Twitter, Instagram and other digital media platforms to let customers get to know your team, your atmosphere and your values.

Remember that in his seminal 1885 book Successful Advertising, Thomas Smith asserted that a customer would have to be exposed to a brand message 20 times before making a purchase. Be where your ideal client is, and be consistent with your message.

Blaze your own path

Be open to bucking the trends: The power players in used car advertising options—Kijiji and AutoTrader to name two—offer valuable services, and we’ve come to think of them as indispensable, but maybe they’re not. They, and similar sites, should comprise just part of your advertising efforts.

“We’ve moved away from the marketplaces directed at people who are already looking to buy,” says John Edelman, Owner of Cayuga, Ontario’s Haldimand Motors, Canada’s largest-volume used car dealer. “If you want to be in the same pool as everyone else, stay in the same marketplace, but if you want to stimulate a customer who might be buying six months from now but isn’t looking yet, you have to be in a different spot.”

Differentiating yourself in a competitive market is difficult, in part because “we’re all depending on the exact same supply chain,” Edelman says. By going after general consumers and not just immediate car buyers, Edelman says he’s not only raising the profile of his store, but potentially prompting an early purchase. “Someone who sees you’ve got the Pearl White GMC pickup they’ve been wanting may buy now instead of waiting for spring.”

Create a unique platform for yourself

There’s an element of devotion to sites like AutoCatch and CarGurus, he notes, because they are perceived as a direct line to quality customers. “Yes and no,” he says. “You end up in this race to the bottom on price. You need to be competitive, but when you’re fresh in a different arena, you get attention.” He says that they’re still tweaking exactly which arenas they’ll use long-term, but his sales haven’t suffered since he changed direction.

While he admits the change was prompted by an invoice dispute that compelled him to withdraw his advertising from one of the biggest players in the space, he says he likes it better now.

“We were being dictated to by a marketplace, rather than stimulating our own mini-economy.” After dropping his advertising in July, he says he had an “out-of-the-park” September and a great October. “My advertising budget stayed the same and my sales went up,” he says.

“These digital platforms are so ballistically strong that you think you have to go that route,” he says. “But I’m learning to create a unique platform for myself.”

The dark side of competition

Cultivate teamwork over competition: At Edelman’s store, sales staff share all commissions based on an hours-worked structure.

“I talk to different dealers who try to keep this competitive edge among their sales staff—if they’re hungry, they’ll fight hard for a deal,” Edelman says. “I disagree.”

He says that the industry norm of creating a competitive atmosphere is unpleasant both for employees and for consumers, whom he says can easily detect any unpleasant undercurrents.

He says he hasn’t had any problems with a demotivated team; in fact, their eagerness not to let one another down has had the opposite effect. “They are accountable to each other,” he says of his sales staff. “There’s something healthy about that in a world that is traditionally not that way.”

He also limits their weekly hours to 36. “They go home to their families,” he says. “I don’t want to be the person responsible for creating a bad home life because Mom or Dad is never there or comes home in a certain mood because they’ve been in a competitive atmosphere all day.” And they never have to stay late or come in on a day off to close a sale.