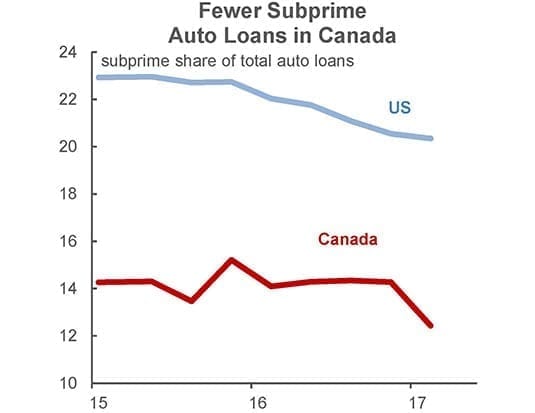 Shoppers are increasingly looking at leasing.

The end of the year is approaching, and the world still hasn’t lost its taste for personal mobility. Over the summer, global sales further accelerated. At the end of August, sales had picked up by about 4.5 percent year-over-year, roughly double the growth we saw over the previous three months. And it’s not just beyond our borders. Closer to home, Canadian sales continued to be even better than we were expecting.

The global sales improvement is broad-based. South America is leading the way with a 14 percent gain, but we’re also seeing sales in China pick up to the highest pace of the past year. More importantly, auto inventories in China have declined to multi-year lows, meaning that new-vehicle production is going to rise as well. That’s going to be important for maintaining the momentum going forward.

In Canada, October’s sales rose by 6.3 percent from the previous October of 2016, which is a record for the month. We also saw a rise of 5.6 percent year-over-year for the total of the first ten months of 2017. Sales have been stronger than even we were expecting, and so we have increased our full-year forecast by an additional 30,000 units. We now have a forecast of 2.03 million.

Incentives versus the crown

If sales continue at the same level, we could see the annual sales rise closer to 2.05 million, but we expect some moderation in the last months of the year. Sales have obviously been helped by incentive levels–when you see an automaker surge by 40 percent year-over-year, there has to be some incentive money driving that—and these incentives tend to be temporary by nature.

However, one thing that could keep incentives and resulting sales going is that the race for first place in the Canadian market is fairly tight between two of the North American automakers, and of course that’s the crown that everyone wants to wear.

We decided to take a look at what’s happening with auto lending, because there are some recent reports in the United States that default rates had been increasing. There had also been some earlier reports about Canada’s auto lending skyrocketing, which could potentially create some problem for the lending industry if this proved to be true, but it turned out to be overstated.

We found that auto loans in both countries have been growing at a double-digit pace from 2014, but more recently, growth in auto lending has slowed, especially in Canada, where the pace of growth is now lower than other household credit lines. From a Canadian peak of 15 percent growth year-over-year in auto loans in the first half of 2015, nearly double the advance of other types of household credit facilities at the time, the pace of auto loan growth has moderated to single digits in both Canada and the U.S.

Leasing is on the rise

In the case of automobiles, that’s particularly because of the fact that many Canadians have switched to leasing instead of auto loans. Leasing now garners about one-third of the new-vehicle retail market in Canada. That’s up from 19 percent just four years ago, and up from 7 percent in 2009 during the global financial crisis.

Lending for new vehicles advanced only 4.6 percent year-over-year in the second quarter of 2017, representing a percentage point lower than overall household credit growth.

This reverses the sharp outperformance we saw from early 2010 through mid-2015. Auto loan market fundamentals have improved so well that auto loan growth in Canada even lags behind disposable income growth.

That’s considerably different than in the U.S., where automobiles remain the fastest-growing component of consumer credit, in spite of some recent moderation in auto loan growth.

When there’s any news of default, real or exaggerated, people immediately think of subprime, but that’s not the case here. In both Canada and the United States, the share of subprime auto loans has been declining.

In Canada, the subprime market is only about 12 percent of overall loans, which is a small share of the overall market and not something that should really be a concern.

Virtually all of the delinquencies happening in Canada are in this small subprime market. Defaults are almost non-existent outside of the lower end of the credit sector, which is always good news for dealers.

The rise in leasing will increase the number of used vehicles returning to the market over the next couple of years, but because leasing has been at such a low level over the last little while, it’s not going to create the type of problem that we saw a decade ago.

At leasing’s craziest height in 2005, it represented 45 percent, which became a major problem for dealers when those vehicles arrived back on the used side of the lot.

Leasing all but disappeared during the economic crisis, and while it is now ramping up and you will see the numbers rise going forward, these lower levels shouldn’t create the same issues as we saw back then. Overall, record sales and strong growth are making for a very good year.