Global Snapshot: An All-Time Record for 2017 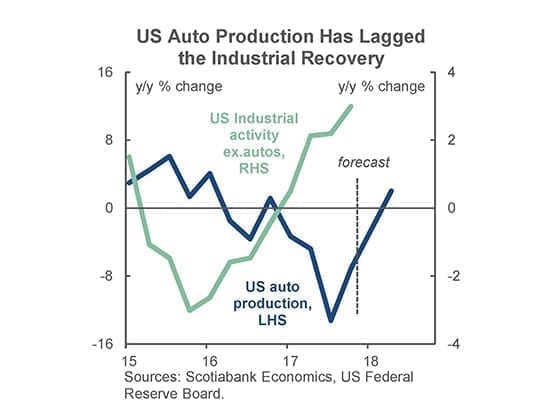 After a strong pace in the summer, the growth in global car sales temporarily softened in October, but it’s not cause for concern. Instead, we’re starting to see vehicle production ramp up, especially in the United States, and we’re going to see that become more widespread as we move through 2018.

We’ve seen an industrial recovery in the U.S. and across the globe, but because of high inventory levels, auto production lagged through much of the year. But very strong sales in the last three months have reduced those inventories south of our border, and that is setting the stage for auto production to rise again. This will in turn add to the strength of that overall industrial recovery, and we estimate that in the last month of 2017, contributions to the U.S. economy from that rising auto production will be the largest they’ve been in the last four years. We think that when the final numbers are available, we’ll see an addition of an annualized 0.6 percentage points to the U.S. GDP growth in the last months of 2017.

New models are coming for 2018 from such manufacturers as Volkswagen, Audi, Kia, and Subaru, and we estimate that they will add more than 220,000 units to North American production in the new year. That will account for more than half of the expected increase in auto production across the continent in 2018. General Motors is revamping its plant in Oshawa, Ontario to produce pickup trucks as well, and this should add to the numbers once the lines are up and running.

Although they’re not included whenever we talk about consumer vehicles, the largest percentage increase in North American vehicle output is coming from heavy trucks. Orders for these have spiked 72 per cent year-over-year in North America, roughly four times the increase of production of these workhorses, primarily due to stronger American economic activity, rising traffic, and stronger business and consumer confidence.
To meet this surge in truck demand, manufacturers were planning to boost production by 50 per cent year-over-year in the final months of 2017, and a further 15 to 20 per cent output gain is likely in 2018. This will lift annual 2018 heavy-truck production to the highest level in three years.

Auto cycles only really end when the economy begins to weaken significantly, and we’re not anywhere near that.

The rise in truck production will happen primarily in the United States, as Canada’s heavy-truck industry is considerably smaller, and is mostly limited to producing trailers, but it’s all part of that overall industrial economy. These large trucks account for about 2 per cent of the U.S. vehicle market, and sales are roughly around 300,000 units on average.

Vehicle production is also ready to increase beyond our shores. New orders for vehicles built in Germany and Spain had increased more than 6 per cent year-over-year as of September 2017, but since actual output had edged lower, it sets the stage for rising assemblies in 2018.

China has also seen strengthening demand combined with multi-year low inventory levels, which points to rising production in Asia. But it’s South America that’s leading the charge, and will post the fastest growth in auto assemblies in 2018. The region had a sharp downturn from 2014 to 2016, but vehicle production has since jumped by more than 20 per cent in 2017, and a further double-digit increase is likely in 2018 as buyers come back from that economic slump.

Sales softened somewhat across North America, and in November, a decline of 1.2 per cent overall in car and light truck sales ended the sixth consecutive streak of monthly records. Still, year-to-date sales to the end of November were up 5 per cent over the first eleven months of 2016, and sales for all of 2017 will top two million units.
That’s the first time ever that Canadians have purchased more than two million cars and trucks in a year. Last year we reached 1.95 million, and as we move into 2018, we expect to see slight moderation, but still forecast that we will be roughly around the two-million mark again.

No downturn in sight

Will this record growth ever end? It will eventually, but our key message is that auto cycles only really end when the economy begins to weaken significantly, and we’re not anywhere near that. The most recent numbers on the euro-zone economy showed it expanding at the fastest pace of the past decade. We’re seeing confidence in Europe and North America, with multi-decade highs, and that’s not the type of economy that leads to weakening sales.

The Canadian numbers continue their trend between cars and light trucks. Passenger car sales were down 10 per cent in November, versus a 2.7 per cent rise in light trucks, and the year’s numbers show a similar trend of cars down and trucks up. We can’t see that changing next year, and trucks will be the key driver in 2018.

Our news for dealers is that as we move into 2018, we’re finishing a record year and sales will continue to do well, because the global economy continues to strengthen. That’s the kind of start we want to see as we move into another new year.