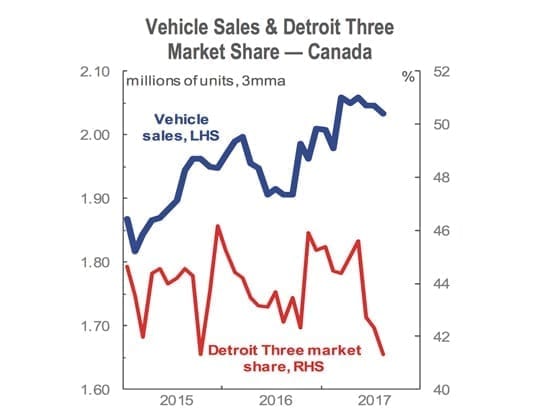 August sales were 10% better than the five year historical average.

According to the the most recent issue of Auto News Flash, published by Carlos Gomes, Senior Economist with Scotiabank, August passenger vehicle sales advanced an impressive 7% above a year ago, and establishing a new record for the month.

“We estimate that purchases remained above an annualized 2 million units last month,” Gomes said in his report, “as both domestic and imported brands posted double-digit year-over- year gains in light truck sales.”

Pickup trucks led the way in August, surging more than 20% above a year earlier, alongside robust gains on the Prairies and a rebound in business investment. The popularity of pickup trucks is greatest in Alberta, with sales of these models soaring more than 30% so far this year. Pickup trucks account for more than 35% of overall sales in Alberta, roughly double their share in the rest of Canada.

August sales were also 10% better than the 5 year historical average for the month, added David Adams, President, Global Automakers of Canada. “August was another tremendous month for the automotive industry generally,” he said. “Unless we hit some unexpected economic turbulence, it seems reasonable that Canada will achieve another new sales record in 2017.”