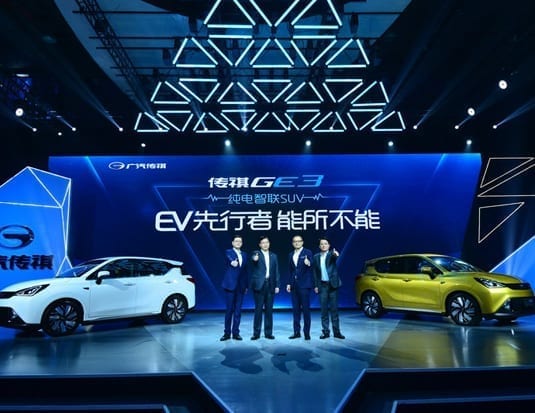 Chinese automaker released first self-developed all-electric SUV with the goal of growing into other markets in the near future.

The all-electric GE3, which made its international debut at the 2017 North American International Auto Show, has been released in China at a base MSRP of USD $22,000.

The GE3 boasts a range of 310 km and comes with a lithium battery that fast charges to 80 percent in 30 minutes.

“Since GAC Motor launched the first hybrid vehicle in 2012, our company has mastered the five core technologies in battery, motor, control unit, electro-mechanical coupling systems and system integration, developing new energy vehicles is a key strategy of GAC Motor,” said Yu Jun, President of GAC Motor. “Launching GE3 is a start and we hope to bring products that meet the future trends while guaranteeing unique driving and riding experience.”

GAC Motor has set the goal of achieving 1 million in sales volume by 2020, as well as expanding beyond their current market. The all-new SUV also meets North American roof compression standards.

“GAC Motor’s strategic emphasis in the next five years include launching new energy sedan and SUV models in all markets, achieving 400-500 km mileage with electric power and fully charge the batteries in under 30 minutes to solve the consumers’ traveling concerns,” Yu added.