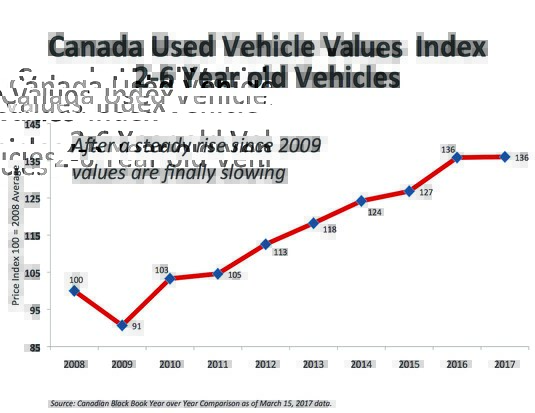 The first quarter is behind us. What’s next ?

More than the first 25 percent of the year is long gone and in the rear view mirror already. That was fast! In recognition of the march of time, I want to address some of what the Canadian Black Book team has observed so far this year, and put some thought into where we are heading for the rest of the year.

The best place to start is with sales. There have been quite a few of those! New and used business are both booming. According to DesRosiers Automotive Consultants, sales rose 4.6 percent and the Canadian new car dealers moved a stunning 421,000 vehicles in the first quarter, up from 403,000 last year. March, just on its own, was up 7.1 percent.

This is a massive start, that even the most optimistic pundits did not expect. At that pace the industry could see its first 2 million unit year ever, with plenty of room to spare. Will it happen? Well, one quarter is only one quarter, but we seem to be headed in that direction at highway speed.

New vehicle leasing continues to grow in 2017 as well. Lease penetration is over 25 percent and flirting with 30 percent at the moment. We still see some room to grow this number. Very strong residual values and low interest rates have made leasing an attractive way to sell cars for many OEMs.

Used car sales, in terms of dollars, are also up quite a bit, 4.5 percent higher in January, which is the latest data StatsCan publishes as I write this. That is also quite a strong and healthy sign for the year ahead. All this impressive news of new car growth is good for business right now. Looking down the road, however, it means the supply of used cars is going to be growing very quickly. With so many year-over-year records in new sales, naturally we are creating more used cars.

Oversupply of cars deflates prices, so that adjustment is headed our way soon. Unless the used car market can absorb this volume naturally, or record exports of used vehicles continue, used car prices and residual values are going down.

At this pace the industry could see its first 2 million unit year ever.

The general economics outside of the industry look very sound for Canada as well. Consumers appear confident, and that is critical. Housing starts are off to a strong start, despite issues of affordability that haunt many consumers.

The national unemployment rate hovers around seven percent and appears stable, except in Alberta where it remains over eight percent.

Value of the dollar

The Canadian dollar remains weak, floundering around $0.75, which is far below the five year average of $0.87. This weak dollar has done all sorts of interesting things for the car business. To be specific, there remains a large number of exports of used cars from Canada to the U.S., although it does show some early signs of slowing.

These exports have the effect of inflating used car/truck prices in a significant way. When the dollar crests about $0.85 we feel a lot of this export activity will slow. Furthermore, this export activity is allowing dealers here in Canada to pull customers out of their current vehicles early, and put them in to brand new ones.

Right now this is possible because of the high value they can get for the customers’ trade at wholesale, particularly if it is a truck. If the dollar rises, this pull forward activity will slow. So, a higher Canadian dollar equals fewer new car sales. You heard it here first!

When Canadian Black Book looks at values of cars at the wholesale level, we do see prices starting to flatten out in general. There are many ways to look at used car data, but if we focus in on two- to six-year-old vehicles, and use an index, this helps clarify the situation.

In the graph example you see on this page, the 100 percent mark is equal to the average price in 2008. We can clearly see that prices bottomed out in 2009 at 90 percent of where they started in 2008, and since then have risen around 50 percent to 136 on the index. A fair percentage of those gains have been fueled by currency supported exports.

So far this year (compared to 2016) you can see there is only about a one percent rise in prices. We view this as the start of a slowdown, and eventual decline of prices. We expect to see this trend continue for the remainder of 2017, and for the next few years. How far and how fast prices descend depends on the exchange rate and how wholesale buyers respond to the growing of lease supply here, and in the U.S. market.

So in summary, things are looking quite good so far for 2017, but we are expecting some headwinds in the later part of the year, and lower prices for used cars in general. This is projected to be the result of reduced export traffic to the U.S. and rising used car supply here.

This reduction in used car values is expected to have a ripple effect, and may slow new car sales as a result of slowing pull-forward activity.

The fundamentals are strong and it could still be a record year, but some slowing is certainly in the cards due to currency pressure and the basics of supply and demand.