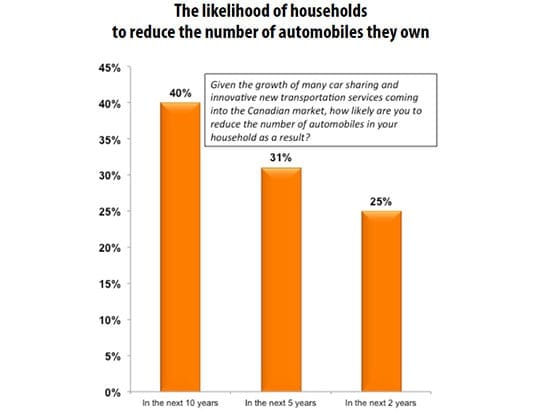 New survey peers into the minds of Canadian automotive consumers.

Hot off the press, Canadian Black Book (CBB) recently received the findings of our second annual consumer poll conducted for us by Ipsos. In last year’s poll we focused on consumers’ understanding of depreciation, as it relates to the vehicles in their driveways. This year we followed up on that topic, and explored Canadians’ thoughts on the future of their car buying habits.

For the latest survey, a sample of 1,011 Canadians from Ipsos’ online panel was interviewed. Weighting was then employed to balance demographics to ensure that the sample’s composition reflects that of the Canadian adult population.

Some good news for the auto industry right off the bat! We found that 62 percent of respondents do plan to buy a vehicle over the next 24 months, which is up 12 percent from last year’s poll! This bodes well for continued sales success in our industry. Males and younger (18-34) buyers showed the greatest increase in purchase intent at 21 percent and 11 percent respectively. Regionally it was Ontario that showed the greatest growth in purchase intent from last year’s poll; it was up nine percent to 65 percent.

We at CBB are very interested in keeping abreast of changes in the industry, especially those that have the potential to alter the future buying habits of Canadians. Those consumer preferences will shape the future of the car industry, as well as values of used cars, which will impact our forecast of residual values for leasing.

The fuel price question
To explore the future road that consumers may travel, we asked about consumers’ reaction to a theoretical $0.25 per litre price of gas increase. What do consumers say they would do? Well, 43 percent of all Canadians would consider buying an alternative fuel vehicle if gas went up by a quarter per litre. Perhaps confirming some notions we have about which province has the greenest mindset, 54 percent of the good people of B.C. surveyed indicated they would consider an alternative fuel option, making them the leader in this regard.

Three in ten (32 percent) Canadians say they’d look at downsizing what they drive to something more fuelefficient, but still a standard gas-powered vehicle. Two in ten (20 percent) would consider buying a smaller car/ truck/SUV than what they currently own, but similar to what they already have, while 12 percent would consider changing their vehicle type—for example, switching from a truck to a car, or from a full-sized SUV to a smaller SUV. A further one in ten (10 percent) would consider a diesel vehicle, while 12 percent would think about not replacing their current vehicle at all, relying instead on public transit, walking or pedal power.

62 percent of respondents do plan to buy a vehicle over the next 24 months which is up 12 percent from last year’s poll.

This leaves three in ten Canadians (30 percent) who say that a $0.25 hike in gas prices wouldn’t affect their next vehicle purchase decision at all. This is not surprising, given that we were at that level of gas prices around the spring of 2014.

Similar to last year’s poll we also wanted to understand which research sources consumers rely on for making their vehicle purchase decisions. In a consumer ranking of their top three vehicle shopping resources, Vehicle Reviews are at 51 percent and Friends and Family at 45 percent lead the way. Online Trade-in Value Calculators were a valued resource in third place for 30 percent of Canadian shoppers, which is nice to see.

Depreciating values
It is surprising still that 21 percent (up four percent over last year) of the total population had no idea of their vehicle value, before heading into the dealership to shop for another car. In the same way that a savvy consumer would spend time configuring their new car, we have always encouraged people to spend some time researching their current vehicles.

What’s also a truly remarkable finding is that just two percent of those surveyed correctly identified depreciation as largest cost of vehicle ownership, up from one percent last year, however that means 98 percent don’t know! Most respondents feel that insurance is the largest cost at 32 percent, maintenance next at 24 percent, and gas at 22 percent.

Car sharing
In addition to fuel prices, the rapid development of the car-sharing economy is another factor to consider when looking at the Canadian auto consumer future. Will the number of cars in the driveway shrink? With innovative new transportation services such as Car2Go, Autoshare/Enterprise, ZipCar and Uber becoming more well-known and used nationally, there is an increasing number of alternatives to having a vehicle.

While a majority of Canadians say they aren’t likely to reduce the number of automobiles in their household as a result of these alternatives, some say they will—and are more likely to consider it as time goes by.

Our respondents indicate 25 percent of the time that they are likely to reduce the number of automobiles in their household in the next two years. In the next five years 31 percent are likely to shrink their personal fleet and looking out ten years the number rises to 40 percent. It would seem that these types of services may have an effect on car ownership especially in the longer term.

That concludes our crystal ball view into the minds of Canadian automotive consumers. There is some good news in there for the industry, along with some indication that things are certain to change as consumers look to other options to meet their transportation needs and wants. Can I get a sharing service that only offers red EV convertibles? Fingers crossed!