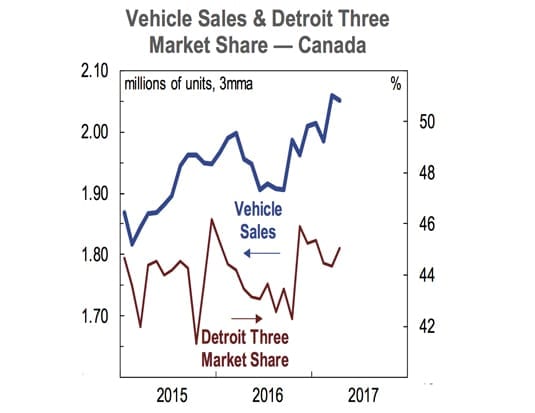 According to numbers compiled by Carlos Gomes, Senior Economist with Scotiabank and AutoJournal columnist, purchases edged down from the record performance of recent months, falling 2% below a year earlier in April.

“We estimate that sales totalled an annualized 1.98 million units last month, down from a record first-quarter average of 2.07 million,” Gomes said in his report.

Sales were also disappointing south of the border, with most automakers reporting lower-than-expected volumes. Gomes estimates that sales totalled an annualized 16.9 million units in April, which is well below the 17.2 million that had been expected.

On the bright side here in Canada, light trucks continued to outperform, advancing 2.5% above a year ago, led by a double-digit gain in pickup truck volumes. Gomes said this likely reflects improving fortunes in Alberta, which accounts for nearly one-quarter of all pickup truck sales in Canada.

Global Automakers of Canada have found a silver lining in the latest sales report. Although they agree that April auto sales in Canada are down, they point out that it’s “not by much.”

“While sales were down slightly in April, on a year-to-date basis auto sales in Canada are still 2.5% ahead of last year’s record-setting level,” said David Adams, President, Global Automakers of Canada. “It’s important to point out that April’s sales levels were almost 10% ahead of the five year average sales for vehicle in April.”