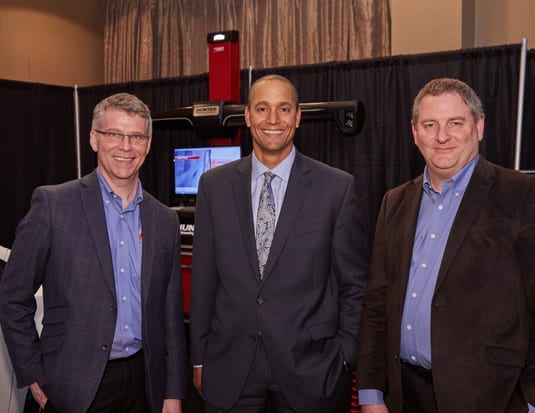 The latest Ontario Dealer Day took place in Woodbridge, Ontario on April 11th. “This year, our trade show was bigger than ever, dealer registration was higher than ever, and our booth space sold out faster than in the previous three years,” said Todd Bourgon, Executive Director of the TADA.

When dealers were asked why they attend Ontario Dealer Day, many said they appreciate the one-stop shopping experience. “It’s great to have everyone in one spot, so you can check everything out at once,” said Jason Van Schoonhoven, Fixed Operations Manager at Maple Toyota. “It’s nice to see the newest products in action, rather than just seeing them in a catalogue, or having a rep try to explain them. You actually get to see them in use. It makes a big difference.”

“This event is fantastic,” said Pasqualli Petrozzi, Service Manager at Maple Toyota. “There are lots of different vendors, new tools, DMS systems, everything. It’s my first time here, but I’m going to be back next year, for sure.”

Manuel Der Haroutiounian, Owner/Manager of Bayview Steels Auto said, “The show is great. The vendors are friendly and there’s lots of opportunity to see demos and find deals. I’ve been coming every year, and I think the list of vendors has gotten better.”

The daylong trade show was held in conjunction with the TADA’s annual general meeting.  “We just inducted our new President, Larry Lantz,” said TADA’s Bourgon. “We also brought Mike Eatson, from Peterborough VW, into the executive. He is our new secretary. We saw Doug Sullivan retire from the executive, and we’re happy to report that Susan Gubasta has become vice-president. Susan is the first woman in our 110 year history not only to be on the executive, but she is now one step away from being out next president.”