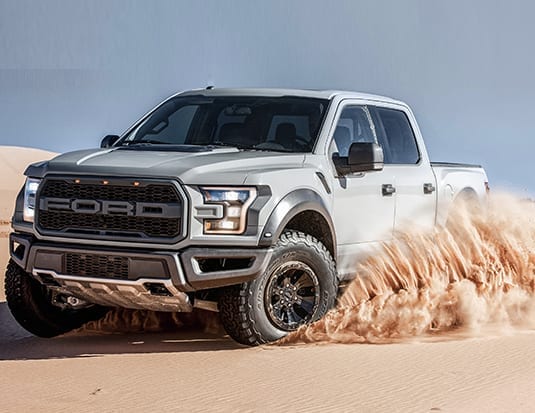 Unparalleled and unique, the go-anywhere Raptor is a truck that sells itself.

It can’t quite leap tall buildings in a single bound, but it comes pretty close. Hands down, the Ford Raptor is the most capable off-road truck that any manufacturer has shipped to consumers straight out of the box.
Based on the F-150, the Raptor morphs into its second generation for 2017, following a temporary hiatus during the ramp-up of the all-new, aluminum-bodied F-150. It features several unique components, including specially engineered Fox internal bypass shocks, an all-new high-output engine, purpose-built frame, and special styling cues.
While many enthusiasts can pump up their regular vehicles with aftermarket components, the Raptor’s specific engineering cannot be duplicated. You simply can’t take a regular F-150 and turn it into a Raptor.
A full production vehicle
But that doesn’t mean it’s a vanity project for Ford. “It’s a stand-alone vehicle, not a boutique, handbuilt product,” says Mike McGarrell, truck communications manager for Ford of Canada. “It’s fully sequenced with regular production, and it is a production vehicle. The production hasn’t been decided (yet) for the 2017 model year, but at one point at the end of 2013, one out of every five vehicles running down the line per hour was a Raptor. The volumes are quite significant.”
The Raptor excels in higher-speed off-road use, and the decision to build it came out of Ford’s long history with motorsport. “There’s a passion in our company for motorsports and that applies to road racing, as in the Trophy Trucks,” McGarrell says. “The off-road portion is a natural extension of Ford’s racing world, and this was an opportunity to build something based on consumer demand. It’s capable off-road, but with the advantages of a production vehicle, and with everything built together rather than pieced together.”
McGarrell doesn’t have exact numbers on demographics, but says that while the truck primarily attracts male buyers, it has a lot of female fans as well. “I don’t know if there is an average buyer,” he says.
“You have two groups of people who are definitely attracted to it. The first is the off-road enthusiast, who wants a truck that can go off-road beyond what a typical vehicle can do, but it can also cruise down the highway at a comfortable speed without NVH issues.”
The other group, he says, is primarily made up of people who appreciate the truck’s capability because they themselves are off the beaten path. They don’t go off-roading for entertainment, but because it’s part of their daily lives. These include those living in harsher rural areas, or whose jobs take them into rough terrain, such as those who work in road maintenance or ranching.
Online videos from many sources
Because it is a very specialized product and with virtually no direct competitors, the Raptor’s marketing campaign is considerably different from that of most of Ford’s other products. McGarrell says there are no dedicated television spots under consideration. If the Raptor does show up in a TV commercial, it will be as a brief portion of a general ad showing all of Ford’s trucks. Likewise, there are few if any plans for print advertising.
Instead, most of the Raptor’s marketing is done through online videos, and not all of it comes directly from Ford’s sources. “The majority of the messaging is video to show the capability of the truck,” McGarrell says. “We post a lot of stuff from motorsports, including a lot of Baja 1000 coverage. It’s from other sources, such as the racers that are involved with Raptor.”
Getting the message out to a general audience isn’t necessary, because the specialized audience that Raptor attracts is already well aware of the truck. “This audience knows more about the truck than a lot of internal people would,” McGarrell says.
Reaching out to customers
Instead, dealers reach out to their customers, and one of Ford’s biggest issues is getting the information out as quickly as possible. “Our dealers tend to know who they have in their pool and will communicate with them,” McGarrell says. “They’re looking for information before the truck arrives, so we want to feed them the information as fast as they’re looking for it.”
Because prospective owners already know so much about the truck and are basically “pre-sold” on it, the company also doesn’t plan on putting together any ride-and-drive events to attract customers.
Since the truck comes with almost everything it needs for off-road, and is offered with a few factory options such as a carbon fibre package, Ford doesn’t offer a lot of accessories for it, other than bead-lock rings through Ford Racing. Anything else comes from the regular F-150 catalogue, such as tonneau covers or cargo management systems.
“This is an example of a vehicle where the product really does the talking for us,” McGarrell says. “The people who tend to be interested in this vehicle know what they need to survive off-road. They know what the aftermarket items are that they’d have to put on a stock vehicle to make it work in that area.”
“There’s a ton of our top-end technology in this truck and that’s what really sells it. People understand the truck and know that it’s built for the environment that it’s designed for.”