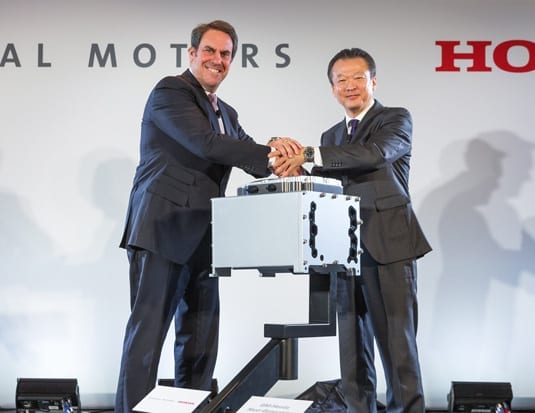 Fuel cell technology will be applied to each company’s future products.

General Motors and Honda have announced a manufacturing joint venture to mass produce a hydrogen fuel cell system, starting in 2020. The companies are making equal investments totaling $85 million in the joint venture.

Honda and GM have been working together through a master collaboration agreement announced in July 2013. “Over the past three years, engineers from Honda and GM have been working as one team with each company providing know-how from its unique expertise to create a compact and low-cost next-gen fuel cell system,” said Toshiaki Mikoshiba, Chief Operating Officer of the North American Region for Honda Motor and President of Honda North America. “This foundation of outstanding teamwork will now take us to the stage of joint mass production of a fuel cell system that will help each company create new value for our customers in fuel cell vehicles of the future.”

The Fuel Cell System Manufacturing joint venture will be operated by a board of directors consisting of three executives from each company that will include a rotating chairperson. In addition, a president will be appointed to rotate between each company.