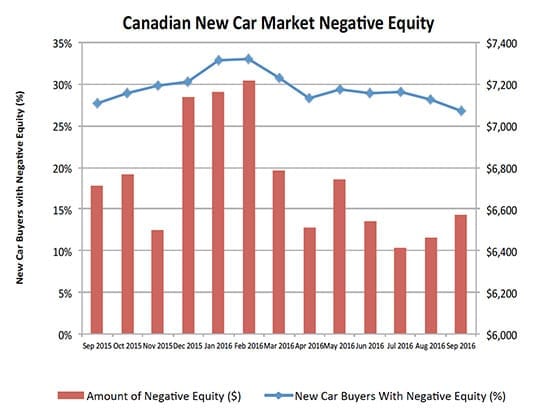 There is a great deal of negativity out there these days, and I’m not referring to any recent political shenanigans. By negativity, I am referring to a bogeyman of the car business: negative equity.

For the uninitiated, negative equity occurs when an auto loan customer owes more on a vehicle at a given date than it is worth in the marketplace. When this is the case, the customer has negative equity, or is referred to as being “under water” by car business insiders. Being “under water” certainly sounds serious. Do we as an industry think that consumers have a clear idea of what this means and how it happened? Is it a serious problem?

Earlier this year Canadian Black Book conducted a poll regarding consumers’ understanding of depreciation and vehicle values. Given that the poll showed only one percent of Canadians understood that depreciation was the biggest cost of car ownership, pardon me if I have little faith in consumers having any understanding of negative equity.

J.D. Power releases a very insightful monthly Canadian Automotive Market Metrics report that tracks, among other things, the percentage of new car deals with negative equity. The amount has remained stable, at just under 30 percent over the past few years. The average amount of negative equity is also steady, but surprisingly it’s just a little over $6,700.

That number, to me, is alarming. Some rough math leads me to estimate that there are almost two billion dollars of negative equity being written into new car deals, this year alone.

The trouble with extended term loans

How did we get here? The tendency to carry negative equity has been aided by the trend towards extended term loans. According to J.D. Power, over 70 percent of new car loans are for six years or more. As a result, car buyers are going beyond the point in time at which they find themselves in a positive equity position.

When five year loans were in fashion, consumers would usually see themselves in an equity position in the fourth year. Now with eight year terms, often borrowers are not in an equity position until the end of the seventh year. So, if at any point during those first seven years they decide to change their car, they will owe more on the loan than the vehicle is worth.

So what does this mean for our business? Over time this trend of negative equity erodes a consumer’s real purchasing power, unless they take on more debt by rolling larger and larger sums of negative equity into their new deal. Essentially the consumer, if all else is kept equal, over time will be able to buy less car. When interest rates rise, the wheels will really fall off this equation.

The practice of continually refinancing unpaid debt increases consumer overall debt load, while we are already experiencing alarmingly high levels of consumer debt in general. Eventually, negative equity will cause consumers to spend less or even defer purchasing at all, which is not good for business.

I do feel there’s an industry credibility and ethical issue at play here. Do salespeople explain clearly the details of the deal? Do we talk about negative equity? Is there transparency that $6,700 of debt from the previous car is rolled into the new deal? Or, is the loan term increased from 72 to 96 months and magically the payment is similar?

At some point, consumers are going to figure out they are in an ugly situation. They won’t blame themselves, but rather the salesperson from their last deal. Most likely this will affect their interest level in returning to the same dealership and perhaps even the brand for their next car. That’s not good for business either.

For the consumer, this is also a great example of why doing your homework and buying the right car the first time is critical. Buy a car that truly meets your family’s needs and will continue to for the term of the loan. Buying smart could mean that a consumer won’t try to get out of a loan before it’s paid off and before they have equity in it. Sticking with the car you have and paying it off is the safe plan.

To be blunt, the responsibility for this issue lies with both the consumer and the seller. What can be done to please the customer, still close the deal, and build trust and loyalty with a buyer?

Transparency and education come to mind.

The consumer has a responsibility to understand, if they do have negative equity, how it factors into the deal. Ask the salesperson. The retailer and lender must be clear on all the details. Ask the retailer about other options. Perhaps a lease is a better choice? At least at the end of a 36-48 month lease, they will be at $0 equity and not below water.

In the long run, transparency, education and presenting different responsible financial options to the customer will lead to trust, repurchase and customer loyalty. Sweeping the issue under the rug may close a deal today but could set up the consumer, and the industry, for serious problems tomorrow.