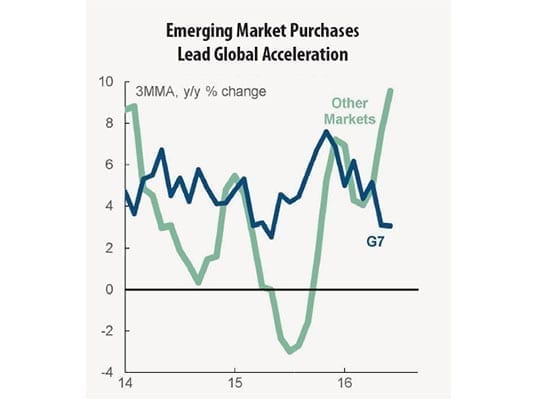 Some feared a setback, but the news is good.

Although many people started the year worrying that weak vehicle sales would intensify across the globe, especially as emerging markets declined last year for the first time since 2001, those fears have turned out to be unfounded. People were negative, but the news is positive. Instead of decline, the acceleration we’ve seen has been stronger than expected, and through July, global sales were up 5 percent.

China represents a large part of that upswing, especially since its authorities cut the sales tax in half last August, from 10 to 5 percent on vehicles up to 1.6 litres, which had the impact of significantly boosting sales. The authorities also cut interest rates.

As a result, double-digit sales gains are expected to continue in China through the end of the year. They’re being led by second-tier cities that have much lower vehicle penetration rates than major centres such as Beijing and Shanghai. In the five major cities with the fastest growth in car sales, vehicle ownership averages fewer than 75 cars or light trucks per 1,000 people. That’s less than onethird the vehicle penetration in Beijing, and nearly 30 percent below the national average. Clearly there is much room for improvement across the country, and that’s what we’ve been seeing.

Double-digit gains
We’re seeing demand in most emerging markets overall, and with the exception of Brazil and Russia, the gains are double-digit. In Western Europe, sales have grown 7 percent year-over-year through July, which represents the strongest gain in nearly twenty years. This is supported by a stronger labour market that is reducing unemployment at the fastest pace in nearly a decade. The jobless rate in Germany, in particular, is at its lowest level since the 1990 reunification.

The Brexit referendum will probably take its toll on vehicle sales in the United Kingdom, but that region had experienced record sales and its gains had started to moderate prior to the June 23 vote. The U.K. accounts for less than 20 percent of overall volume across Western Europe and any downturn will not derail the European recovery.

On target for record sales
Here in Canada, we’re continuing to do quite well, and sales are on target to reach records again this year. The gains are broad-based, with the exception of the oil-producing provinces of Alberta, Saskatchewan and Newfoundland, but even in those three provinces the decline has started to subside. Alberta had a 12 percent decline through the first seven months of last year, but now it’s 7 percent. The speed of deterioration has started to turn its direction and is beginning to improve, and we expect to see upturns in these jurisdictions by 2017.

Ontario and British Columbia have seen the highest gains, with 9 and 7 percent respectively alongside strengthening economic activity.

Of course, as we well know, whenever the U.S. sneezes, then Canada gets a cold. The good news is that most indicators tracking the United States are suggesting that the consumer remains very healthy, whether you’re looking at the employment market, vehicle affordability, or people making their loan payments on time. Canadians tend to be fearful of what’s happening to their American counterparts, but when we look at the U.S. consumer, we’re not seeing any cracks in the armour. American job growth is advancing by nearly 2 percent year over year, and there is no evidence of decline in the automotive finance market. We expect U.S. purchases to continue to move higher for the remainder of 2016, and continue that way in 2017.

Room for replacement
There is also still a pent-up demand for new vehicles south of the border. There are more than 50 million vehicles on American roads that were built prior to the new millennium, which gives you a sense of how many of them need to be replaced over the next little while. The latest sales gains reduced U.S. inventories by 2 percent below a year ago, and points to continued output gains in the coming months. And since most of Canada’s auto production crosses the border to U.S. showrooms, that’s good news for us.

Last year, North American sales topped 20 million units for the first time on record, and increased an additional 3 percent year-over-year through July 2016. Mexico had the highest gains, with volumes up 18 percent to the end of July, thanks to a strong labour market and accelerating credit growth. Even though interest rates in the country have started to increase, Mexico’s auto loan growth has also picked up to 15 percent year-over-year.

Overall, on a global basis, we’re looking at labour markets that are doing reasonably well, and some of the risk indicators we track have improved significantly from earlier this year. This tell us the good news that the market will remain healthy into 2017.