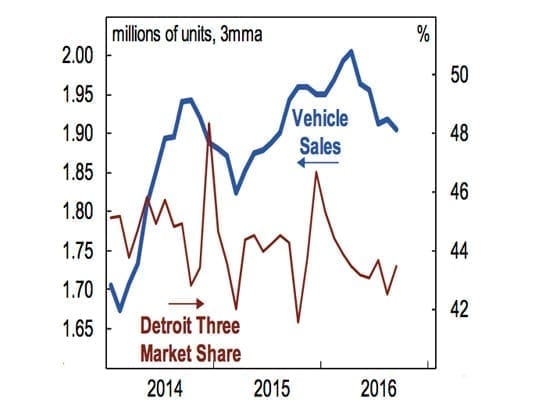 According to the latest Auto News Flash, published by Carlos Gomes, Senior Economist and Auto Industry Specialist with Scotiabank, Canadian new car sales numbers bounced back in September, but remained marginally below the year-ago record for the same month.

“We estimate that purchases totalled an annualized 1.96 million units in September, up from a subpar performance during the previous two months and a year-to-date average of 1.95 million,” Gomes said in his report. “In fact, several automakers set sales records for the month of September, and the overall industry total only fell short of last year’s peak due to a double-digit slide at a manufacturer currently undergoing a significant sales adjustment. Excluding that automaker, Canadian passenger vehicle sales rose 2% above a year earlier, led by an 8% jump in light truck purchases. In particular, sales of imported light truck brands advanced 11% above a year earlier, with broad-based double-digit gains across most of the industry.”