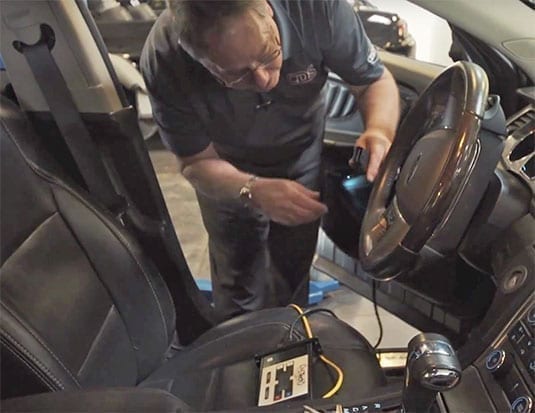 Recently, Donny Seyfer rented a Hyundai Elantra and was surprised to see that it featured emergency braking, lane departure warning and other driver safety assistance items.

“This was a bare bones model, with cloth seats,” says Seyfer, Executive Officer, National Automotive Service Task Force. “You can’t assume a car doesn’t have an Advanced Driver Assist System (ADAS) based on the model anymore.”

That’s why he advises reading the OEM procedures before any repair. “You can’t even do an alignment without reading the procedures,” says Seyfer. “You have to be prepared so you don’t underestimate it. When you’re working on a system, you may be doing something to impact it.”

The job has changed so much recently that techs need to add on a pre-assumption, that whatever procedure they’re doing has probably changed since the last time. “Sometimes it requires going to different parts of service information than usual,” says Seyfer. He points out that there are 122 variations of a Ford F-150. “A dealer tech can’t know what to do without looking at the breakdown of the vehicle, to see what it needs.”

And the industry has been working very hard to make that information easier to find. “Generally speaking, most technicians don’t really use service information anywhere near its capabilities,” says Seyfer. “The techs have to make that leap. That’s the way we’re going to protect consumers from getting hurt.”

Most of the third party providers derive their information from the OEM. “But there are times when you read something, and it doesn’t make sense,” says Seyfer. “That’s when you go to the specific automaker’s website or use the third-party information, and ask for more information, specifying the procedure that you’re concerned about.”

Repair procedures should include time for techs to get up to speed. “When we get something new in, my service advisor will print out the procedure for the tech,” says Seyfer. “We want to reinforce the need to read first. We are now researchers on the work that we’re doing. That may be our new reality forever.”

He estimates about 30 percent of vehicles on the road today have ADAS. “By 2022, all the major manufacturers will provide automatic emergency braking as a standard feature,” says Seyfer.

Pre and post scans should be done on all vehicles, whether they are equipped with ADAS or not, according to Bob Augustine, Vice President, Business Development, Drew Technologies/OPUS IVS. “Pre scans can baseline the vehicle, and identify pre-existing conditions unrelated to the customer complaint, and then help in developing a comprehensive estimate and repair roadmap,” he says. “Post scans will verify that all systems were properly repaired and operating to specification.”

Techs need to ask questions about the interaction between the parts being replaced by a system that would use that particular part. “For example, the steering angle sensor and active suspension,” explains Augustine. “Any time a suspension component is replaced, the vehicle will need an alignment and possibly a recalibration.”

When a safety system is not functioning properly, the occupants of the vehicle and others on the road are placed at unnecessary risk. “This is not only unethical, but also a large legal liability,” says Augustine.

Techs need proper training, including hands-on work. “Traditional seminar training with no practical exercises is not a suitable substitute for safety systems that require complicated target setups to complete recalibration,” says Augustine. “They also need to familiarize themselves with the OEM scan tool for the model they are working on, as that is the best tool to complete the repair.”